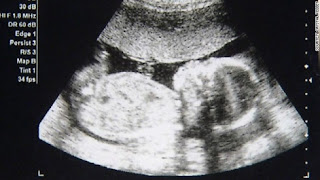 This is a bizarre story from the US state of Connecticut which appeared on CNN today but deserves far wider distribution.

I run the story here without comment, but it demonstrates just how complicated things can become in a world where IVF, commercial surrogacy and abortion come together.

It is poignant that it has come to light the day before submissions close for Fiona Bruce’s parliamentary inquiry on abortion for disability.

Crystal Kelley, 29, who already had two daughters of her own, hired herself as a commercial surrogate for $22,000 to carry a couple’s two frozen embryos. The couple already had three children and desperately wanted a fourth child, but the mother couldn't conceive.

One embryo survived after implantation but the five month ultrasound scan showed the baby had a cleft lip and palate, a cyst in the brain, and a complex heart abnormality.

The doctors explained the baby would need several heart surgeries after she was born. She would likely survive the pregnancy, but had only about a 25% chance of having a ‘normal life’. The commissioning parents wanted an abortion but Kelley felt that all efforts should be made to 'give the baby a chance'.

The parents tried to convince Kelley to change her mind and said that they had pursued surrogacy in order to minimize the risk of pain and suffering for their baby.

The two sides were at a standoff. The doctor and the genetic counselor offered an amniocentesis in the hope that by analysing the baby's genes, they could learn more about her condition.

Kelley was amenable but the parents felt that the information gained from this testing would not influence their decision to opt for abortion. They were very upset and said that Kelley ‘should try to be God-like and have mercy on the child and let her go’.

Kelly told them that they had chosen her to carry and protect this child, and that was exactly what she was going to do. She told them it wasn't their decision to play God and walked out of the room.

She then received an e-mail from Rita Kron at Surrogacy International telling her that if she chose to have the baby, the couple wouldn't agree to be the baby's legal parents.

Kelley didn't want to be the baby's mother - she'd gotten pregnant to help another family, not to have a child of her own. She was then told that the parents would pay her $10,000 to have an abortion.

The offer tested Kelley's convictions. She'd always been against abortion for religious and moral reasons, but she really needed the money.

Kron took Kelley to lunch. Kelley said, ’She painted a picture of a life of a person who had a child with special needs. She told me how it would be painful, it would be taxing, it would be strenuous and stressful. She told me it would financially drain me, that my children would suffer because of it.’

Kelley made a counter offer. ‘In a weak moment I asked her to tell them that for $15,000 I would consider going forward with the termination’, she said. But as soon as she got in the car to go home, she regretted it.

Kron let Kelley know the parents had refused to pay $15,000 but by that point, it didn't matter to Kelley -- she'd decided against abortion no matter what.

On 22 February 22 2012, six days after the fateful ultrasound, she received a letter from the parents’ lawyer saying that she was obligated to terminate the pregnancy immediately. The lawyer informed her that she had  signed a contract, agreeing to ‘abortion in case of severe fetal abnormality’ and was in breach of contract.

If she did not abort, the parents would sue her to get back the fees they'd already paid her -- around $8,000 -- plus all of the medical expenses and legal fees.

Kelley found a lawyer who was willing to take on her case free of charge who  explained that no matter what the contract said, she couldn't be forced to have an abortion. She wrote back to the couple’s lawyer saying that ‘abortion is off the table and will not be considered under any circumstance’.

The couple’s lawyer then phoned telling Kelley’s lawyer that the parents had changed their minds and now planned to exercise their legal right to take custody of their child -- and then immediately after birth surrender her to the state of Connecticut. She would become a ward of the state.

Kelley couldn't stand the thought of the baby in foster care but was advised by her lawyer that under Connecticut law she'd likely lose in court.

Her only option was to move to another state where, under a different law, where she and not the genetic parents, would be considered the baby's legal mother. That place was 700 miles away.

On 11 April 11, in her seventh month of pregnancy, Kelley and her daughters left for Michigan.
She chose Michigan because of its laws, but also its medicine: she'd been doing research on the baby's condition, and concluded CS Mott Children's Hospital at the University of Michigan had one of the best pediatric heart programs in the country.

When she arrived, she found an inexpensive summer sublet from a University of Michigan student and applied for Michigan Medicaid. She made appointments with a high-risk pregnancy specialist and a pediatric cardiologist.

There was one thing left to do: She had to decide if she would keep the baby. She was a single mother with no job and no permanent place to live, but she'd grown emotionally attached to the life inside her, and some days she wanted to keep her. She finally decided she wasn't the right person to raise the child but through a support group found a couple who were willing to adopt.

But about one month before the baby's due date, the original parents filed in Connecticut Superior Court for parental rights. They wanted to be the legal parents with their names on the birth certificate. The legal papers included a stunning admission: the wife was not the baby's genetic mother -- they'd used an anonymous egg donor.

The case had now become very complicated. The lawyers were still negotiating about who would be the legal parents when the baby was born on 25 June.  Three weeks later, the two sides struck a deal: The father agreed to give up his paternal rights as long as he and his wife could keep in touch with the adoptive family about the baby's health.  Since then, the couple has visited the baby and the father has held her.

The baby's medical problems turned out to be much more extensive than the ultrasound at Hartford Hospital had revealed. She had a birth defect called holoprosencephaly, where the brain fails to completely divide into distinct hemispheres. She also has heterotaxy, which means many of her internal organs, such as her liver and stomach, are in the wrong places. She has at least two spleens, neither of which works properly. Her head is very small, her right ear is misshapen, she has a cleft lip and a cleft palate, and a long list of complex heart defects, among other problems. 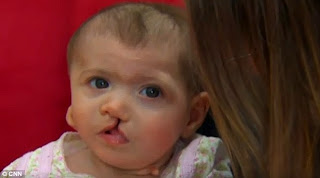 ‘Baby S’, now nine months old, has a long road in front of her. She's already had one open-heart surgery and surgery on her intestines, and in the next year she'll need one or two more cardiac surgeries in addition to procedures to repair her cleft lip and palate. Later in childhood she'll need surgeries on her jaw and ear and more heart surgeries.

Her adoptive parents, who asked to remain anonymous to protect their family's privacy, know Baby S  might not be with them for long. The cardiac procedures she needs are risky, and her heterotaxy and holoprosencephaly, though mild, carry a risk of early death, according to doctors. If Baby S. does survive, there's a 50% chance she won't be able to walk, talk or use her hands normally.

Her adoptive parents know some people look at her and see a baby born to suffer -- a baby who's suffering could have been prevented with an abortion. But that's not the way they see it. They see a little girl who's defied the odds, who constantly surprises her doctors with what she's able to do -- make eye contact, giggle at her siblings, grab toys, eye strangers warily.

Kelley says, ‘I can't tell you how many people told me that I was bad, that I was wrong, that I should go have an abortion, that I would be damned to hell.’

But in the end, she feels like she did the right thing. ‘No one else was feeling this pregnancy the way that I was. No one else could feel her kicking and moving around inside,’ she said. ‘I knew from the beginning that this little girl had an amazing fighting spirit, and whatever challenges were thrown at her, she would go at them with every ounce of spirit that she could possibly have. No matter what anybody told me, I became her mother.’