The UK is ‘woefully under-prepared  for the social and economic challenges presented by an ageing society, a House of Lords committee has warned this week.

The committee predicts ‘a series of crises’ in public service provision and says that big changes in pensions, health care and employment practices are needed to help people ‘sustain a good quality of life’ as they age.

The committee is calling on the government to set out its thinking on the issue before the next election and for all parties to consider the implications for public spending, in their next election manifestos.

A leading think tank, the International Longevity Centre UK, said the report should be a wake-up call for government and society as a whole and that individuals would have to take more responsibility for their health and income in retirement.

I consider this to be a massive understatement.

The demographic winter, whereby shrinking birth rates and increasing longevity, contribute to a falling population and distorted age structure is most marked in Japan. The bar graphs above (from the Economist) show the structure of Japan’s population in 1950, 2012 and 2055 (more detail here).

For about 50 years after the second world war the combination of Japan's fast-growing labour force and the rising productivity of its famously industrious workers created a growth miracle. Within two generations the number of people of working age increased by 37m and Japan went from ruins to the world's second-largest economy.

In the next 40 years however that process will go into reverse. The working-age population will shrink so quickly that by 2050 it will be smaller than it was in 1950, and four out of ten Japanese will be over 65. Unless Japan's productivity rises faster than its workforce declines, which seems unlikely, its economy will shrink. 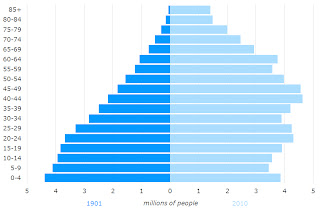 The changes in the UK’s age structure are not as dramatic as those in Japan but follow a similar pattern. The graph (right) shows the change between 1901 and 2010.

The UK’s population is both larger and older than it was a hundred years ago, and most of the difference in size is due to an increase in the older population.

More than 320,000 of the 400,000 people living in care homes in England, Wales and Northern Ireland now have dementia or severe memory problems.

Around one in three people over the age of 65 will develop dementia in their lifetime and the number of people with dementia is increasing - 800,000 now will become 950,000 by 2021 and is estimated to double in the next 40 years. So will the current costs of care.

The £23bn figure being quoted for dementia care today is nearly double the figure spent on cancer and three times the sum for heart disease. And all this is in the face of £20bn ’efficiency savings’ needed in NHS spending over the next few years. 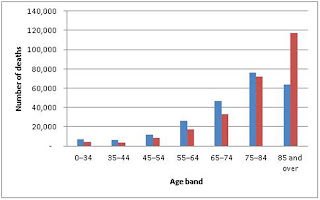 Given that 50% of healthcare costs go on people in the last six months of life, and that people are more likely to die the older they get (see chart left) an age structure such as a the UK's is becoming generates massive healthcare costs.

We have a growing elderly population supported by a smaller and smaller working population – fuelled by elderly people living longer and an epidemic of abortion, infertility and small families.

Some European politician and economists have been chillingly open about the economic necessity of euthanasia. Jacques Attali, the former president of the European Bank for Reconstruction and Development, said in 1981 in an article in L’Avenir de la vie :

Sunday Times journalist Minette Marin in 2011 in an even more apocalyptic analysis called the demographic timebomb ‘an enormous grey elephant in the room’ and argued that euthanasia will become an economic necessity.

It is abundantly clear that unless something is done to reverse demographic trends, ‘economic necessity’, together with the ‘culture of death’ ideology which is becoming more openly accepted, may well mean that the generation that killed its children through abortion will in turn be killed by its own children through euthanasia.

But the answer is not euthanasia and this makes it even more imperative that we fight hard to combat the two British bills and court cases which threaten to legalise it this year.

The real answer to Britain’s crisis is in our grasp, but it requires a completely different mind-set to that which has led us as a nation, in our reckless pursuit of affluence and personal peace to mortgage our present, bankrupt our futures, and see those who rely on us as a burden rather than a privileged responsibility.

The demographic time-bomb is a challenge but as Christians it should lead us to live more simply, give more, save more, serve more, love more, value those who are dependent, both old and young, more deeply, have more children younger and earlier to reverse the demographic trends and replenish the workforce, and work harder to provide good care for all.

Over all it should lead us to preach the Gospel more.
Posted by Peter Saunders at 11:04