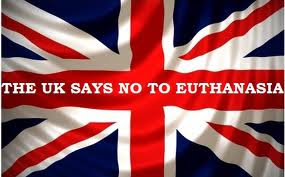 I was recently interviewed by Emily Graves of Crossrhythms Radio about moves to legalise euthanasia and assisted suicide around the world. The following is an extract from the interview focussing on recent developments in Britain. The full transcript is available on line.

Emily: Looking a bit closer to home, what is the perspective on euthanasia in the UK at this time?

Peter: There's been a lot of pressure to change the law here for many years. There have been three attempts, two in Westminster Parliament and one in Scotland over the last six years, and all of them have failed. All of them have attempted to legalise assisted suicide (when a doctor helps them kill themselves) rather than euthanasia. The reason that British parliaments have opposed these laws is primarily about their concern for public safety. If you change the law for a small number of people that some may regard as deserving, then inevitably what happens is that vulnerable people feel pressured to end their lives. I am talking about people who are elderly, who are sick, who are depressed, who are perhaps disabled; people who feel for whatever reason that their lives constitute some kind of emotional or financial burden for others. That's why British parliaments have universally blocked it, but of course the pressure goes on and on. We've got two bills coming later this year; another one in the House of Lords and another one in Scotland, which will attempt to push those boundaries yet again.

Emily: Please could you tell us more about these bills?

Peter: There’s a bill introduced by Lord Falconer into the House of Lords. It's had its first reading, which means it's been printed and viewed and it will have its second reading either in the autumn or early next year when it will be debated by the House of Lords. Then if it's passed it will go to the committee stage third reading and then on to the House of Commons. It would have to pass through both Houses of Parliament to become law.

Lord Falconer wants to legalise assisted suicide, but not euthanasia, for mentally competent adults who've got six months or less to live. The Scottish bill is being introduced by a member of parliament, Margo MacDonald; she’s tried it before and failed. She’s got the 18 signatures she needs to take a bill forward and she’s held a consultation and we think it’s going to be assisted suicide for mentally competent adults similar to Falconer. We haven’t seen the bill printed yet, so we don’t know exactly what’s in it. We expect it will come out this autumn. We’re just waiting to see, but we hope that there will be a huge amount of opposition against both of these bills, because we don’t want to go down the Belgian or the Dutch route.

Emily: For those who don't know, could you tell us a little bit more about assisted suicide?

Emily: How will the Christian Medical Fellowship respond when these bills go through?

Peter: Christian Medical Fellowship is one of about 40 organisations involved in the alliance called Care Not Killing, which brings together faith groups, human rights groups, health care providers and disability advice groups, all to promote good care and to oppose any change in the law. We will be working in conjunction with parliamentarians and media people. We’ve been on the media, producing briefings and helping them oppose this law as it comes. It will be a very busy time over the next few months with that.

Emily: As Christians we look to God for his answers and we look to his word in the Bible as well. What does the Bible actually say about euthanasia?

Peter: The Bible tells us all that human beings are incredibly precious because they’re made in God’s image. The whole idea of being made in God’s image, for relationship with God, is what gives us dignity, meaning and purpose. It’s also linked in the Bible very closely, to ‘you should not intentionally take the life of an innocent human being’. This the real meaning of the sixth commandment, ‘you shall not kill’. Genesis 9 tells us that because human beings are made in the image of God we are not justified in taking the life of a legally innocent human being, even if it’s our own life. It’s only God who has the power and authority to take human life, not us.

The Bible tells us that because human beings are precious, that we should treat them with the utmost respect, dignity and compassion. As well as opposing changes in law that would endanger vulnerable and innocent people, Christians need also to be at the forefront of providing the best possible care for people who are disabled or suffering. Certainly for Christian doctors, including those who are involved in Christian Medical Fellowship, many of them went into medicine because they believed that God was calling them to show the love of Christ compassionately through good medical care and to use those skills more. It’s about killing the pain and not killing the patient and it’s always possible to substantially relieve symptoms that people are having; to be able to provide good care. We really believe that when people are properly looked after as whole people, and I don’t just mean their physical needs, but also their emotional and spiritual and social needs as well, then very few ever want to end their lives. We think the priority has to be to make sure that really good care is more widely accessible and that people are properly supported through disability and sickness.

Emily: As a Christian how would you respond to someone who may have the option of euthanasia or assisted suicide? How would you tell them about the message of God and his hope for them?

Peter: If you have a patient who is entertaining these questions, you first need to understand why it is that life’s got so desperate that they want to end it. You want to find out what’s prompting this request. Is it pain? Is it nausea? Is it some other symptom that could be relieved? Or is it something bigger, what we call an existential question; that they’ve lost hope, meaning or purpose and that’s often the case. We know that wanting to end one’s life is not necessarily linked to physical illness at all. In fact most suicides here in the UK are related to mental illness or to depression or loss of meaning and purpose; broken relationships, alcohol and drug abuse, those kinds of things. It’s also being able to address those questions.

It strikes me about this debate; you can have two patients who have pretty much exactly the same kind of condition and the same kind of symptoms. One of them wants ‘assisted living’, help to live with dignity and have symptoms relieved, and the other one actually wants their life ended. It’s much more about the person than the disease. That’s an important thing to grasp and often questions and meaning and purpose and hope are right at the heart of it. As Christians we have incredible hope, not just for this life, but in the life beyond, because we’re confident in Christ that we are utterly secure and that nothing can separate us from his love. Death is not the end but the gateway to judgement and Jesus has paid the price for our sins and made it possible for us to have a life with God for all eternity in a wonderful new heaven and a new earth that’s coming. Many people don’t have that hope and I think that that does feed into this culture of despair and the culture of death that we are seeing increasingly recently in a society that is pretty much post-Christian and has lost its belief.

Emily: What is your prayer for Belgium at this time and also for the UK?

Peter: My prayer for Belgium is that they come to their senses and don’t pass the new law they are proposing. That they wake up to the dangers of the path that they’re going down. I hope that they will repeal their existing law; that they’ll make it illegal once again and instead that they’ll put all their investment to good palliative care for end of life patients and good support for those who are disabled. That’s my prayer. I pray also for Belgium that as part of a dark continent spiritually that there'll be real revival of belief and faith in Christ. That the Christian faith will advance again throughout the whole continent. My prayers for Britain are pretty similar. I think we have to ask the question, why is there such a big demand from so many people for euthanasia and assisted suicide at a time when medical care and standards of life have never been better? I think that’s much more due to the loss of hope and loss of Christian faith; the breakdown of families and so on that accompanies that. Our prayers and heart have got to be for a revival of love, for Christ to transform lives and communities and a real atmosphere of hope in this country.