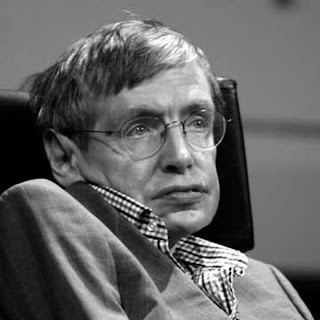 In an interview with the BBC, he said:

‘I think those who have a terminal illness and are in great pain should have the right to choose to end their lives and those who help them should be free from prosecution.

But there must be safeguards that the person concerned genuinely wants to end their life and they are not being pressurised into it or have it done without their knowledge or consent, as would have been the case with me.’

Prof Hawking, now 71, was diagnosed with motor neurone disease (MND) aged 21 and told that he had just two or three years to live.

Following a bout of pneumonia in 1985, he was placed on a life support machine which his first wife, Jane Hawking, had the option to switch off, but instead insisted that he be flown back from Geneva to Cambridge.

He recovered from his pneumonia and went on to complete his popular science best-seller ‘A Brief History of Time’, which sold more than 10 million copies worldwide.

Somewhat ironically, he is living proof of the fact that doctors can be very wrong about prognoses (28 years out in Hawking’s case!), and that one can live a worthwhile life, full of meaning and purpose, despite having a serious, progressive, life limiting disease.

There have been three attempts to legalise assisted suicide in Britain since 2006 all of which have been defeated by substantial majorities. Two further bills, one in the House of Lords and one in Scotland are currently awaiting debate.

All of these bills contain the kind of safeguards Hawking has referred to but on each occasion in the past parliamentarians were not convinced that they would work and opted to reject them out of concern for public safety.

Their judgement was that any change in the law to allow assisted suicide or euthanasia would place pressure on vulnerable people – those who are elderly, sick, disabled or depressed – to end their lives for fear of becoming a financial or emotional burden. Such fears would be acutely felt at a time of economic recession when many families are struggling to make ends meet and health budgets are being cut. Moreover subtle forms of coercion within families are extremely difficult to detect, even by skilled health professionals.

There is thus a logical slippery slope operating, in that if you accept that assisted suicide or euthanasia is applicable for some under strict criteria, then it must follow logically that it will also be applicable for others outside these bounds.  Activists pushing for legalisation are obviously aware of this.

As I have previously argued, evidence of practice in those jurisdictions that have legalised assisted suicide and euthanasia (especially Belgium and the Netherlands) shows that the safeguards are illusory.

Lord Falconer’s bill, about to be debated in the House of Lords, uses a licensing system similar to that in the Abortion Act whereby two doctors certify in good faith that the necessary legal conditions apply.

But practice under the heavily 'safeguarded' Abortion Act demonstrates clearly why such a system involving doctors as the gatekeepers does not work in practice.

First, there has been a steady escalation in abortion since the change of the law in 1967 to the current situation where there are 200,000 abortions per year, accounting for one in five pregnancies. This is in spite of the law being 'heavily safeguarded' to allow abortion only in rare circumstances.

Second, almost all abortions currently fall outside the legal boundaries. 98% are carried out on grounds that continuing the pregnancy poses a greater risk to the mental health of the mother than having abortion, when there is no scientific evidence that this is ever the case. In most of these cases the real grounds are social inconvenience, failed contraception, economic difficulty or unwanted pregnancy.

Third, flagrant abuses of the law are not prosecuted. The current case of the DPP’s refusal to prosecute two doctors who authorised abortions on grounds of sex selection has attracted widespread criticism but no action. Similarly cases identified in 14 NHS trusts of forms authorising abortion being signed by doctors who had not even seen the women concerned have brought no action from the CPS, despite being in breach of the Perjury Act.

In addition there are other reasons to be suspect of such legislation.

First, we have already seen in the failures of regulation by the Care Quality Commission and other regulators over poor care in hospitals and care homes (eg, North Staffordshire) that abuses by healthcare staff will not be dealt with adequately until it is too late.

Second, if some doctors cannot be trusted with a clinical tool like the Liverpool Care Pathway, which was abandoned after a major enquiry due to widespread abuse, why do we imagine they can be trusted with authorising and administering assisted suicide?

Third, and this is probably what concerns me most, having assisted suicide as a healthcare option potentially saves a lot of money on care. This will inevitably make it an attractive option to families, healthcare managers and politicians who are wanting to cut costs. The danger of vulnerable people then being subtly steered toward suicide under such a system is very real and will be very difficult to detect. For a start, the key witness in each case will be dead and unable to give evidence.


We are best off with the current law, a blanket ban on assisted suicide and euthanasia but with discretion given to prosecutors and judges in hard cases. The penalties the current law holds in reserve provide a strong deterrent to those with an interest in another person’s death but allow flexibility for compassion. Most importantly it does not give doctors the power and authority ever actively to end life. We tamper with it at our peril.
Posted by Peter Saunders at 15:03