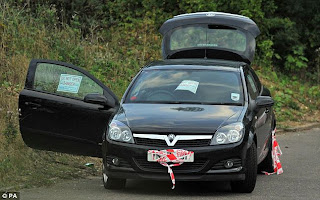 A couple found dead in a car on an industrial estate in Braintree, Essex on Monday, are believed to have been involved in a suicide pact.

Police now believe that Steve Lumb (35) and Joanne Lee (34) had met only hours before after initially making contact on an internet suicide forum.

Miss Lee is understood to have posted a message on the forum begging someone to join her in taking her own life. According to report in the Sun newspaper, she wrote. ‘I haven't the strength to do this alone. I'm not a cop, a cannibal or a murderer, just desperate. I have all the ingredients and want to do it ASAP’.

Her plea was answered by Mr Lumb, a lorry driver, who apparently drove 200 miles from his home town of Sowerby, West Yorks, to join her. Their bodies were found in his fume-filled Vauxhall Astra in Miss Lee's home town. Police believe they died after mixing chemicals in a bucket to make a lethal gas.

Distraught parents Jill and Brian Lee apparently had no idea that their daughter was planning to kill herself and Mr Lumb’s father Melvin, who lived with his son, said he had never shown signs of being depressed.

Following a number of high-profile internet-related suicides over recent years, among them the tragic cases of Nadia Kajouji and Mark Drybrough, parliament changed the law last year in an attempt to prevent similar events occurring in the future.

The Suicide Act was amended by the Coroners and Justice Act last year in order to deal specifically with cases such as these. The law now reads:

‘Under section 2(1) of the Suicide Act 1961 (as amended by section 59 of the Coroners and Justice Act 2009) it is an offence to do an act capable of encouraging or assisting the suicide or attempted suicide of another person with the intention to so encourage or assist… The person committing the offence need not know the other person or even be able to identify them.'

It is important to note that even if no suicide attempts take place as a result of information given via websites that might encourage or assist suicide, internet authors can still be found guilty of an offence.

On the surface it certainly seems as though the law has been breached, and on the basis of reports thus far, that other individuals (still living) could have been involved in assisting or encouraging a suicide.

It is of course impossible to know exactly what went on between Steve Lumb and Joanne Lee in the hours immediately preceding their deaths, and in particular whether any coercion was involved by either party. Both of the key witnesses are now dead and nothing can bring them back. But other vulnerable people may also be in danger.

It is therefore imperative that the police now fully and promptly investigate the circumstances of this case to assess whether any crime has been committed and, in particular, whether others were involved.

Should there be evidence sufficient to bring charges, all eyes will be upon the Director of Public Prosecutions to see whether he considers it to be in the public interest to do so.

On the basis of what has been reported it seems highly likely that, had these two people not met on an internet forum, they would both still be alive today.

Suicides like this can be prevented but it will require the joint commitment of parliament, prosecutors, police and communities if internet sites are to be properly regulated and the encouragement of suicide significantly curbed.
Posted by Peter Saunders at 08:42