Are British Christians too fat? Almost certainly! But what should we be doing about it? 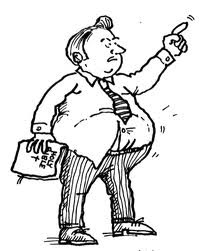 New research this week has shown that two-thirds of Britons are overweight or obese – making us the fattest country in Europe.

According to research company Datamonitor, a quarter of Britons are obese (15 million), with a body mass index (BMI) of 30 or more, while four in ten of us (25 million) are overweight (BMI>25),

The figures were published this week as a separate study showed that the number of people admitted to hospital for obesity-related illnesses has shot up by more than ten times in the past decade.

The health risks of being overweight are significant. Obesity isn't just an issue of personal health. The cost to the NHS and to the wider economy - because of increasing time off work - is estimated at about £7 billion per year, of which £1 billion is direct health service costs.

How fat are you? If your BMI is over 25 then maybe it is time to take action.(You can calculate your own BMI easily online)

Weight loss in principle is fairly simple. If you are overweight (>25) or obese (>30) you can lose weight either by eating less or by exercising more. Recommended daily calorie intake varies from person to person, but there are guidelines for calorie requirements you can use as a starting point.

UK Department of Health Estimated Average Requirements (EAR) are a daily calorie intake of about 2,000 calories per day for women and 2,500 for men. The key is to make your input (in food) match your output (in activity). If input is greater that output you will gain weight. If input is less than output you will lose weight.

But which is easier – to eat less or exercise more?

About 500 fewer calories per day (that’s one McDonald’s quarter pounder or one large chocolate milkshake!) over the course of a week (ie. 3,500 calories) will result in a one pound loss for an average person.

But to lose a pound through exercise the same person would have to run almost 30 miles at 8 minute mile pace! (Calorie burn calculator here)

So you can see that it’s far easier to eat less than exercise more.

The Bible tells us that physical training is of some value – and of course it is – but the key thing if you want to avoid obesity and all its attendant health risks is to eat less.

Are British Christians too fat? If US data is any thing to go by (and remember we are almost as fat as the Americans!) then the answer is a big ‘yes’. Because in the US, the more Christians per state, the higher the level of obesity. (see diagram above)

Christians do seem to be at least as prone to obesity as those in the general population.

But when did you actually last hear a sermon on overeating or exercise?

A much fuller treatment of the issue of obesity from a Christian perspective can be found on the CMF website. See Facing the Obesity Epidemic
Posted by Peter Saunders at 11:31