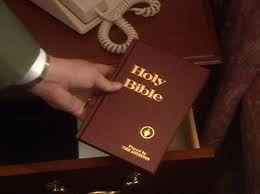 The ban, at the Nottingham University Hospitals NHS Trust, is intended to help cut levels of infectious superbugs such as MRSA. Apparently they want all bedside areas in Queen’s Medical Centre and City Hospital kept tidy and ‘clutter-free’ to stop disease spreading.

A similar proposed ban in Leicester in 2005 was called off after being criticised as ‘political correctness gone mad’ and after an outcry from local Christians Nottingham hospital officials are now consulting staff, patients and chaplains before bringing in the ban.

A ban on Gideon Bibles makes little sense as an infection control measure. The MRSA risk is low and to be consistent hospitals would have to ban newspapers, library books and all paper from patients’ bedsides. One wonders about the real motivation here.

The move also betrays a profound ignorance of the link between spirituality and health. A major review of 1,200 studies in the British Medical Journal showed a 60-80% relation between better health and spirituality and summarised a growing body of medical research showing that religious faith has a positive impact on disease prevention, coping with illness, recovering from surgery and improving treatment outcomes. The majority of these studies specifically evaluated the Christian faith and the majority of them have now been gathered in Koenig’s magnum Handbook of Religion and Health,which is regarded by many as the key authoritative text on the subject.

This and other scientific evidence has convincingly demonstrated that a natural by-product of religious faith is longer life, less illness, better physical and mental health, more marital stability, less divorce, less suicide and less abuse of alcohol and other substances, all outcomes that we would expect a health authority might be keen to promote.

The Gideons is a respected organisation operating in 181 countries that for over 100 years has been distributing Bibles free of charge. It is deeply ironic that this latest ban is being considered on highly tenuous grounds in a country where 70% still claim to be Christian and where members of other faiths have not been offended.

It is also sad that by doing so hospital managers risk depriving vulnerable people of spiritual comfort and may well be shooting themselves in the foot with respect to promoting health.
Posted by Peter Saunders at 04:14

Email ThisBlogThis!Share to TwitterShare to FacebookShare to Pinterest
Labels: Gideons, Spirituality and Health