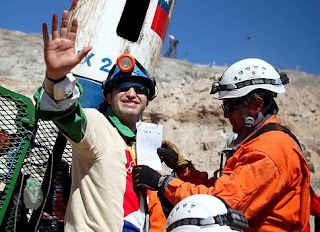 Reverend Alfredo Cooper, chaplain to Chile’s president, was interviewed this afternoon about the rescue of the Chilean miners on Radio Five Live’s Drive programme by presenter Peter Allen.

Cooper took the opportunity with both hands to give the full glory to God, delivering a wonderfully clear and gracious testimony about the power of prayer. You are very unlikely to read the following transcript in any newspaper, so enjoy!

The discussion took place just after 5pm and you can now hear it on you tube or on the Christian Institute website.

Peter Allen: ‘Actually there was one gentleman I got a chance to talk to a little bit earlier. He’s the Reverend Alfredo Cooper. I’ll be absolutely honest with you. We heard an English voice down the line and in fact this gentleman apparently had turned up to thank the British press for what they’d done with this whole event and when they heard his English voice we got him in front of the microphone. He’s called the Reverend Alfredo Cooper. He’s actually chaplain to the country’s president and he told me when he first got involved in the aftermath of the mine’s collapse.’

Rev Cooper: ‘I am a chaplain in the presidential palace and so we had to quickly put together an emergency prayer meeting and it was with all our hearts because to imagine these 33 men a kilometre under the earth not knowing whether they were alive or what was going through their minds.17 days we prayed and then the miracle came when the boring machine glanced off a rock and hit them – hit the cavern they were in - and of course we just erupted in praise. The second service the president called for was a praise meeting so we had a thanksgiving service and since then we’ve had constant prayer. And this has been one of the interesting factors for folk like us to notice. Many of the miners went down as atheists, unbelievers or semi-believers and they have come up to a man testifying that they were not 33 but that there were 34 down there - that Jesus was there with them and that they had a constant sense of his guidance and presence.’

Rev Cooper: ‘Well the thing is that in this fallen world this is exactly what does occur. Man is subject to accidents and all sorts of problems thanks often to his wilful negligence as was the case in this mine. There are consequences when you don’t care enough for people. And of course in those situations we might compare Jonah in the whale - you know people tend to cry out to God and this is what’s happened. And God has answered.’

Rev Cooper: ‘Well of course we see the hands of all these magnificent experts all around, the good will of so many people internationally and the brilliant coverage of the press and we would suggest that all this works together for good, that certainly as we prayed God has guided in remarkable ways – even the scientists. I was with the NASA people who came the other day. And to my surprise - to a man they were believing scientists in their case - and they all said “This was a miracle. There is no other word for what happened here”.’

Rev Cooper: (really getting into it now!) ‘So you know - Scientists, politicians, presidents - we’ve all come together in one happy moment saying, “Goodness! God is there and he answers prayer.” That’s how we feel. And certainly the miners are also testifying to the world of this - not just about that but certainly it seems to be a central factor.’

I waited patiently for the LORD; he turned to me and heard my cry.
He lifted me out of the slimy pit, out of the mud and mire;
he set my feet on a rock and gave me a firm place to stand.
He put a new song in my mouth, a hymn of praise to our God.
Many will see and fear and put their trust in the LORD.
Blessed is the man who makes the LORD his trust.
(Psalm 40:1-4)
Posted by Peter Saunders at 14:58