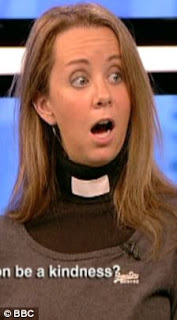 Her actual words? 'If I were the mother of a suffering child - I mean a deeply suffering child - I would be the first to want to put a pillow over its face... If it was a child I really loved, who was in agony, I think any good mother would.' She added, 'If a baby's going to be born severely disabled or totally unwanted, surely an abortion is the act of a loving mother.'

Another guest on the programme, Rev Joanna Jepson (pictured), was left open-mouthed and presenter Susanna Reid looked visibly shocked during the live debate, responding: 'That's a pretty horrifying thing to say, that you would put a pillow over a suffering child.'

Ironside’s comments understandably sparked a storm of complaints from viewers and an outcry from disability rights spokespeople but personally I was left even more deeply disturbed by the amount of apparent public support for her views.

If the rapid responses on the Daily Mail website represent in any way the views of the general population (and are not simply those of a vocal minority drafted in for the occasion by eugenic activists) then it seems that many British people actually agree with Ironside. Furthermore, those comments supportive of Ironside’s position attracted the most ‘thumbs up’ from readers whilst those criticising her stance were uniformly given the ‘thumbs down’.

One respondent, calling herself, ‘Widget’ of ‘Broken Britain’, attracted over 1,400 stars from fellow readers for writing, ‘I can see what she is saying - or rather trying to say - and I completely agree. What loving, caring mother would make the conscious decision to bring a child into the world that would live in continual pain and agony and have zero quality of life for its whole existence?’

We are now in Britain well used to pro-euthanasia advocates Dignity in Dying’s calls for a change in the law to allow ‘mentally competent adults suffering unbearably with terminal illness’ to receive lethal injections to end their lives.

But it seems that many members of the public, undoubtedly affected by the protrayal of seemingly desperate cases on the media, now wish to go much further than this. And in fact to do so actually follows logically from what we are already doing. If we abort over 95% of all babies with Down Syndrome diagnosed before birth on the basis that their lives are judged not to worth living, then why not allow infanticide just a few months later, or equally, why not legalise euthanasia for mentally incompetent patients with brain injury or dementia at the other end of life? Wouldn't this be simply taking the principle to its logical conclusion?

Historic codes of medical ethics, like the Hippocratic Oath and Declaration of Geneva, however, forbid all compassionate killing for very good reason.

Some years ago I came across the words of a doctor given in defence at a euthanasia trial and was struck by how compassionate they seemed.

'My underlying motive was the desire to help individuals who could not help themselves... such considerations should not be regarded as inhuman. Nor did I feel it in any way to be unethical or immoral... I am convinced that if Hippocrates were alive today he would change the wording of his oath... in which a doctor is forbidden to administer poison to an invalid even on demand... I have a perfectly clear conscience about the part I played in the affair. I am perfectly conscious that when I said yes to euthanasia I did so with the greatest conviction, just as it is my conviction today that it is right'.

It was seeing the name attached to the testimony that brought me up short. The words were actually spoken at Nuremberg by Karl Brandt, the doctor responsible for co-ordinating the German euthanasia programme during the Second World War. Ironically, many of those involved were in doctors who seemed to be motivated initially by compassion for their victims. But their consciences, and that of the society which allowed them to do what they did, gradually became numbed.

The Nazi holocaust, contrary to popular opinion, did not begin with jack-booted Nazis in death camps like Auschwitz and Treblinka in the mid 1940s. Rather it had far subtler beginnings with doctors in hospitals and psychiatric institutions in the 1930s. And the very first victims were 6,000 disabled children whose lives were judged not to be worth living and who were killed for reasons of ‘compassion’.

You see, once you start killing out of compassion, it can be very difficult to draw a line. And like a frog who makes no attempt to escape from water which is gradually brought to the boil, if the change in temperature is gradual enough, it can be very difficult to perceive what is happening until it is too late. Given some of the reaction to Ironside’s comments it might already be too late for Britain.
Posted by Peter Saunders at 15:59