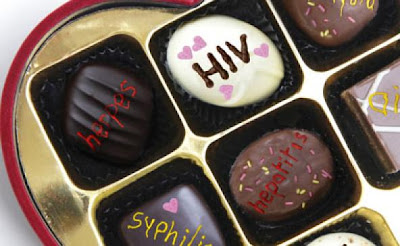 Hot on the heels of Holly actor Michael Douglas’ claim that his oral cancer was the result of oral sex (also see here) comes today’s report  that diagnoses of sexually transmitted infections rose to almost half a million in England last year, with the highest rates in those aged under 25.

According to Public Health England, there were 448,422 diagnoses in 2012 - a rise of 5% from 2011. The data show too many people are putting themselves at risk through unsafe sex, it says.

People aged under 25 made up 64% of all chlamydia and 54% of genital warts diagnoses in heterosexuals in 2012. New diagnoses of gonorrhoea rose 21%, which is a concern given the growing global threat of antibiotic resistance.

What accounts for this continuing epidemic?

Well according to Dr Gwenda Hughes, head of STI surveillance at Public Health England, ‘These data show too many people are continuing to have unsafe sex, putting themselves at risk of STIs and the serious consequences associated with infection, including infertility.’

Among the advice Public Health England offers to help reduce the risk of STis is ‘always use a condom when having sex with new partners, reduce the number of sexual partners and avoid overlapping sexual relationships’.

What the BBC doesn’t tell you is that condoms do not protect adequately against three of the most common STIs: Herpes, HPV (which caused Michael Douglas’ problem)and Chlamydia (one of the commonest causes of infertility).

Nor do they say that, with failure rates for condom users running at one in seven per year, those who follow the government's advice on avoiding STIs may find themselves playing not just the lottery, but Russian roulette.

The BBC’s ‘reducing the risk’ lists contains five suggestions but, perhaps not surprisingly, mentions neither abstinence nor being faithful to one partner throughout life.

So let me say it.

If you want not just to reduce the risk of sexually transmitted infections but actually to eliminate it altogether then marry a virgin and stay faithful to him or her ‘as long as you both shall live’.