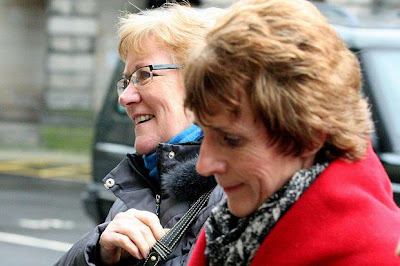 Two Glasgow midwives, who won a landmark legal battle to avoid taking any part in abortion procedures, may now have to return to court.

Last April appeal judges ruled that the right of Mary Doogan and Concepta Wood (pictured) to conscientious objection meant they could refuse to delegate, supervise or support staff involved in abortions.

The verdict marked the first time in Britain that the right to conscientious objection was deemed to extend beyond direct participation.

But a spokesperson for NHS Greater Glasgow and Clyde (GGC) has now said (apparently at the prompting of the National Secular Society) that it is the health board’s intention to appeal the decision of the Inner House of the Court of Session to The Supreme Court (Further reports here and here).

Lady Dorrian, who presided at the previous appeal  with Lord Mackay of Drumadoon and Lord McEwan, said: ‘In our view the right of conscientious objection extends not only to the actual medical or surgical termination but to the whole process of treatment given for that purpose.’

The previous judgment was hugely significant and meant that official guidance from both the Royal College of Midwives (RCM) and the General Medical Council (GMC) would almost certainly need revision.

The outcome of the case is important because the Supreme Court is the highest court in Britain and its rulings will therefore be binding on all lower courts and will have repercussions not just for nurses but also for doctors and all other healthcare staff.

As I have previously argued as Christians we should not be intimidated by state or other authorities who attempt to force us to do what we believe is morally wrong.

Abortion not only takes an innocent human life, it is also contrary to all historic codes of medical ethics including the Hippocratic Oath and Declaration of Geneva.

These courageous midwives, who have been victimised by their health authority, deserve our prayers and support.

(I have blogged on this case more extensively here, here and here)
Posted by Peter Saunders at 14:25