The Big IF - Lobbying world leaders on malnutrition, land rights and tax is right but charity begins at home 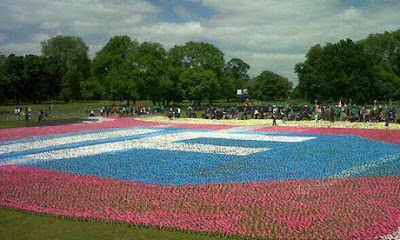 A colourful installation of thousands of plastic flowers (picture), the petals of which represented the millions of children who die each year as a result of malnutrition, was the focal point of the Big IF rally.

Organised by the Enough Food for Everyone IF coalition of over 200 NGOs, including dozens of Christian and faith-related groups, the initiative is the first major joined-up campaign since Make Poverty History in 2005, the last time the UK held the G8 presidency.

The Make Poverty History movement focussed on trade, aid and debt whilst the main targets of the Big IF are malnutrition, land rights and tax.

The IF coalition, which includes Save the Children, Oxfam, Unicef and Christian Aid, is calling on the G8 group of industrialised countries, which meets in Northern Ireland on 17 and 18 June, to increase funding to tackle malnutrition and stunted growth.

Its key message is: ‘There is enough food for everyone, yet one in eight people do not have enough food. This year, world leaders must tackle hunger and save millions of lives.’

The coalition also wants the G8 to make greater efforts to give people in poorer countries control over their land, both by ensuring transparency and greater accountability over land deals and by closing loopholes that allow companies to dodge paying tax.

Figures published by the Lancet on Thursday showed malnutrition to be the root cause of death for 3.1 million children, accounting for about 45% of deaths among children under five years of age.

The growth of a further 165 million children was stunted as a result of poor diets, according to the Lancet's research. Previous estimates had put the figure at 2.3 million.

While supporters enjoyed the sun in Hyde Park, across London politicians and government officials pledged up to £2.7 billion to tackle malnutrition, effectively doubling the annual current spend on nutrition by 2020. The UK has pledged an extra £375 million to help the world's poorest children.

There will be another rally in Belfast next weekend together with a summit looking for commitments to tackle tax and transparency.

Addressing the unjust societal structures and mechanisms that promote and perpetuate poverty and malnutrition are key Christian priorities.

But we also need to repent of the materialism in our own lives that blinds us to the needs of the poor and marginalised.

Richard Stearns, President of World Vision United States, brought a huge challenge to the church in what I thought was one of the defining events of the Cape Town 2010 Lausanne Congress.

He argued that there is ‘a hole’ in our Gospel:

‘Jesus described a big Gospel, a Gospel that began with proclamation and evangelism, yes, but also embraced compassion toward our fellow man and biblical justice – proclamation, compassion and justice – you see these three defined the good news of Jesus Gospel.

We are called to care for the widow, the orphan, the alien and the stranger. We’re called to lift up justice and fight economic disparity; to speak up for the voiceless and to hold our governments accountable; to be generous with our money and to live lives of integrity before a watching world.

This radical gospel of love, word and deed was intended by Jesus to launch a social and spiritual revolution on earth, one that had the power to change the world.

But sadly the church over the centuries has often failed to be that good news…  What about our generosity? In the wealthiest of all nations in Christian history we give just 2.5% of our incomes to God’s work, 75% less than the biblical tithe. And 98% of what we give is spent in the United States – 98% for us and 2% for the rest of the world.

“I was hungry while you had all you needed. I was thirsty but you drank bottled water. I was a stranger and you wanted me deported. I needed clothes but you needed more clothes. I was sick but you pointed out the behaviours that led to my sickness. I was in prison and you said I was getting what I deserved.”

This is the version of Matthew 25 that many Americans and even churches have embraced…. Sometimes I dream and I ask "What if?" What if we actually took this Gospel seriously? Could we, might we, actually be able to change the world?’

You can read and listen to the full message here.

Stearns’ description of the US church equally applies here in the UK. How will we respond I wonder?

Will be like the people of Sodom who ‘were arrogant, overfed and unconcerned; they did not help the poor and needy’ (Ezekiel 16:49)?

Or will we walk in the footsteps of Jesus Christ who ‘made himself nothing by taking the very nature of a servant’ (Philippians 2:7) and who ‘though he was rich, yet for your sake he became poor, so that you through his poverty might become rich’ (2 Corinthians 8:9)?

What will people say of us in 2025? More importantly, what will God say?
Posted by Peter Saunders at 14:31