Four blood moons coinciding with major Jewish festivals in 2014-5 – does it have any significance? 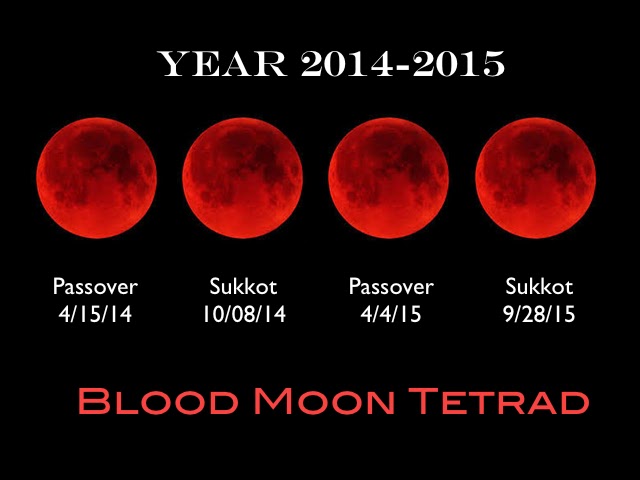 In my experience British Christians are either deeply suspicious or profoundly disinterested in eschatology (the theology of the last things). Meeting Christ after death therefore features far more in their thinking than his ‘second coming’.

Many British atheists and secular humanists find the idea of the return of Christ frankly risible.

And so I’m guessing it is unlikely, if you are a British Christian, that you will have read much at all about the significance of the four ‘blood moons’ this year and last.

The Blood Moon Prophecy, recently popularised by Christian authors John Hagee and Mark Biltz, states that an ongoing tetrad (a series of four consecutive lunar eclipses—coinciding on Jewish Holidays—with six full moons in between, and no intervening partial lunar eclipses) is a sign of the end times as described in the Bible.

The latest such tetrad occurs in 2014 and 2015. The ‘blood moon’ comes from the New Testament and is referred to by two of Jesus’ closest disciples: Peter, who preached the first Christian sermon at Pentecost, and John, who wrote Revelation, the last book in the Bible.

‘The sun will be turned to darkness and the moon to blood before the coming of the great and glorious day of the Lord.‘ (Acts 2:20)

‘I watched as he opened the sixth seal. There was a great earthquake. The sun turned black like sackcloth made of goat hair, the whole moon turned blood red.’ (Revelation 6:12)

The prophecy has its origin in the Old Testament book of Joel which describes both a total solar eclipse and a total lunar eclipse.

‘The sun will be turned to darkness and the moon to blood before the coming of the great and dreadful day of the Lord.’ (Joel 2:31)

The event is also alluded to by Jesus Christ himself in the Olivet discourse, spoken just prior to his arrest and crucifixion:

Jesus immediately follows these words with a reference to his own return:

'Then will appear the sign of the Son of Man in heaven. And then all the peoples of the earth will mourn when they see the Son of Man coming on the clouds of heaven, with power and great glory. And he will send his angels with a loud trumpet call, and they will gather his elect from the four winds, from one end of the heavens to the other.’ (Matthew 24:30-31)

This passage echoes the prophecy of Zechariah over 400 years earlier, which suggests that the Jewish people would recognise the crucified Christ as Messiah and turn to him en masse.


'And I will pour out on the House of  David and the inhabitants of Jerusalem a spirit of grace and supplication. They will look upon me, the one they have pierced, and they will mourn for him as one mourns for an only child, and grieve bitterly for him as one grieves for a first-born son' (Zechariah 12:10)

This same theme of Jews recognising Jesus as the Messiah also features in Paul’s letter to the Romans in the mid first century.

‘I do not want you to be ignorant of this mystery, brothers and sisters, so that you may not be conceited: Israel has experienced a hardening in part until the full number of the Gentiles has come in, and in this way all Israel will be saved.’ (Romans 11:25-26)

Many Christians see this as a reference to Jewish people turning to Christ just prior to his return. They therefore see the current rapid growth of messianic (Christ- believing)  Jewish congregations as the start of this process. There are now estimated to be over 20,000 messianic Jews in Israel alone in over 200 congregations.

Jesus himself suggested that the return of Jews to Israel, after an almost 2,000 year diaspora following the destruction of Jerusalem by the Romans in AD 70, as a marker of the ‘time of gentiles’ coming to an end.

‘They will fall by the sword and will be taken as prisoners to all the nations. Jerusalem will be trampled on by the Gentiles until the times of the Gentiles are fulfilled. ‘(Luke 21:24)

Jews began returning to Israel in the mid 19th century, leading to the Balfour Declaration in 1917, the establishment of the State of Israel in 1949 and the capture of Jerusalem during the six day war in 1967.

So what of the blood moons?

From the first century until now there have been a total of 62 tetrads of blood moons. However, only eight of these have fallen on Jewish feasts of Passover and Tabernacles (Sukkot). Several of these eight occurrences have coincided with important events in Jewish and Christian history.

The last two of these have been in the years 1949-50 and 1967-68 coinciding with the birth of the state of Israel and the capture of Jerusalem.

This eighteen month period has been characterised by the rise of Islamic State, a rising tide of anti-semitism in Europe , a hardening of Western political attitudes to Israel and an escalation of persecution of Christians in the Middle East.

What further might happen this year remains to be seen but to all Christians these astronomic events are a poignant reminder to ‘keep watch’ by turning daily to Christ and being earnest in evangelism and active in his service. (Matthew 24:4, 42, 25:13)

There are those who mock the prospect of Christ’s return, pointing to 2,000 years passing since he first appeared.

But the Apostle Peter reminds us that God delays in calling history to an end precisely in order that people may have a chance to turn to him and receive forgiveness whilst there is still time to do so. (2 Peter 3:9)

For when the author of the story of the universe walks back on to the stage of history it will be too late to change sides.

For an explanation of the significance of Christ’s death and resurrection see, ‘The real meaning of Easter: why did Christ have to die?’

For a fascinating account of how the Babylonian Saros Cycle can be used to date Jesus' crucifixion, which also occurred at a lunar eclipse, see here.
Posted by Peter Saunders at 15:56