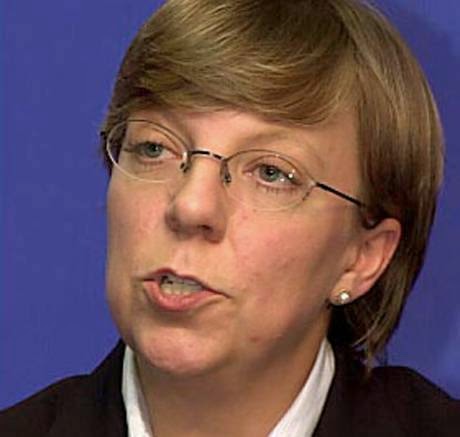 Perhaps surprisingly, the Sunday Times has been the only broadsheet newspaper to cover a landmark case (£) which challenges the powers of the crown prosecution service.

The CPS head Alison Saunders (pictured), Director of public prosecutions (DPP), is already in considerable hot water over her failure to prosecute Lord Janner for alleged sex abuse, an action she justified on grounds of him not being capable of standing trial because of dementia. This new development may add considerably to those difficulties.

Sadly this latest case lies behind the Sunday Times paywall which has somewhat restricted it coming to the wider public attention that it deserves, so I will quote some of the article in this post.

‘A woman who was once so paralysed she could only wink her right eye will this week launch a High Court challenge against “liberal” guidelines on assisted suicide brought in by Alison Saunders, the embattled director of public prosecutions (DPP).

Nikki Kenward, 62, will on Tuesday seek a judicial review after doctors and nurses who help severely disabled or terminally ill people to take their own lives were told that they are now less likely to face criminal charges.’

Kenward, a former theatre manager, was struck down by Guillian-Barre syndrome in 1990, aged 37.

She was initially fully paralysed for more than five months, and has been in a wheelchair since. She cannot tie her laces or hold a needle, but had a play staged last year and campaigns against euthanasia and assisted suicide through the Distant Voices pressure group. Her case is backed by the Christian Legal Centre.

Lawyers for Kenward will argue that Saunders exceeded her powers with a what she called a ‘clarification’ to the guidelines on prosecution for assisted suicide which she made last October (see my previous article here).

They will argue that she has entered a policy realm that should properly be a matter not for her but for parliament. They will also say that the attorney-general has failed in his duty to ‘superintend’ the DPP. In other words they will claim that she has gone beyond her remit which is to uphold the law and not to make the law.

To quote the Sunday Times again:

‘They are expected to argue Saunders’s guidance will “enable healthcare professionals operating on an ideological or other premise to offer their services to a person wishing to commit suicide . . . this is crossing the Rubicon”. They will add: it will “make any prohibition on a Dignitas-style of assisted suicide difficult to resist”.

“[It] weakens the protection given by parliament to people . . . coming under pressure to commit assisted suicide.”’

The fuller background to this case deserves unpacking.

Back in 2009, as a result of the Supreme Court judgement in the Debbie Purdy case, the DPP was required to make public the criteria by which he (then Keir Starmer) decided whether a prosecution in a given case of assisted suicide was in the public interest.

The summary of responses received and the responses themselves are still in the public domain.

The interim policy did not contain a paragraph about the role of medical professionals but as a result of the consultation one was included in the definitive policy.

14. ‘the suspect was acting in his or her capacity as a medical doctor, nurse, other healthcare professional, a professional carer [whether for payment or not], or as a person in authority, such as a prison officer, and the victim was in his or her care;’

Keir Starmer gave his reasons for including the new clause here.

‘For the avoidance of doubt the words "and the victim was in his or her care" qualify all of the preceding parts of this paragraph [43.14]. This factor does not apply merely because someone was acting in a capacity described within it: it applies only where there was, in addition, a relationship of care between the suspect and the victims such that it will be necessary to consider whether the suspect may have exerted some influence on the victim.’

The key questions raised by Kenward’s case are whether this amounts to a change in the policy or merely a clarification and whether the DPP should have made the change without consulting anybody.

My own view is that DPP has actually crossed the line in both instances.

The relevant factors as I see it are as follows:

1. The ‘clarification’ makes it clear that doctors who do not have ‘a relationship of care between the suspect and the victims such that it will be necessary to consider whether the suspect may have exerted some influence on the victim’ are now not within the scope of this clause. This surely means that people like Philip Nitschke and Michael Irwin, who have made a name for themselves by assisting suicides in various ways whilst not being the patient’s primary care giver, are less likely to be prosecuted. This is real change in my view.  Irwin, who welcomed it as ‘a wonderful softening’ agrees with me. I think it is also clear from the current General Medical Council (GMC) guidance and Medical Defence Union (MDU) guidance (see also here) that these bodies did not understand the guidance in the way that Alison Saunders has now re-interpreted it. See below

2. Assisted suicide is contrary to all historical codes of medical ethics including the Hippocratic Oath, the Declaration of Geneva, the International code of medical ethics and the Statement of Marbella – which was reaffirmed by the World Medical association (WMA) as recently as 2013. The latter reads, ‘Physician-assisted suicide, like euthanasia, is unethical and must be condemned by the medical profession. Where the assistance of the physician is intentionally and deliberately directed at enabling an individual to end his or her own life, the physician acts unethically.’ So a strong argument could be made that this new ‘clarification’ is morally corrupting for the medical profession  as it makes possible their direct involvement in an unethical practice with far less possibility of prosecution.

4. The GMC makes it clear in its guidance on assisted suicide that ‘encouraging or assisted suicide’ is against the law. It makes no mention of any mitigating factors and warns doctors strongly against any involvement. It certainly does not convey the impression that doctors like Irwin, Nitschke etc are exempt. It is precisely this understanding of the law which led to Tony Nicklinson  and  Paul Lamb trying unsuccessfully to change it through the courts. Saunders seems now effectively to have done that at the mere stroke of a pen.

5. It is precisely people like Nitschke and Irwin who will push the envelope rather than ordinary GPs in a relationship of care with patients, although the ‘clarification’ does also give scope to GPs to do a little assisted suicide on the side with patients who are not ‘in their immediate care’. This clarification appears to give them free rein.

6. The phrase ‘In their care’ can be interpreted in several different ways. One might argue that any doctor using his skill and expertise to help a patient kill themselves is actually involved in ‘care’ even if he is not their primary doctor.

7. The reason people responding to the original consultation pushed for the inclusion of the doctor clause in the first place was because of concerns about the unique position of doctors. Doctors possess the sort of knowledge and power that could easily be abused.  We have seen already how they push legal boundaries with abortion and how prosecutors are very unwilling to hold them accountable. This is why doctors need strong guidance and laws in place to ensure that some of them do not end up becoming the most dangerous people in the state. It is also why they should not be involved in assisted suicide.

8. As the doctor phrase (clause 14 quoted above) was introduced into the DPP guidance after, and as a direct result of, a lengthy public consultation (34% of respondents supported its inclusion) surely it should not be changed, or redefined, at a whim by the DPP without a similar public consultation. Simply asking medical bodies for their opinion would be inappropriate and inadequate – rather like asking the police about guidance on prosecuting policemen. This is why the GMC now has a strong lay membership because as a result of the Shipman case and others it was decided that doctors were not  capable of regulating themselves.

It seems to me that the DPP has not merely ‘clarified’, but actually changed the meaning and scope of the guidance. Furthermore she has made the change without apparently consulting anybody at all.

I await the result of Kenward’s legal challenge with great interest.