Was Anne Milton's denunciation of abstinence-based sex education a 'misreport' or a Clintonesque 'misspeak'? 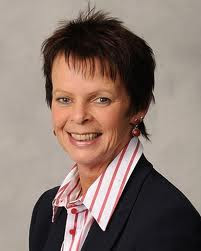 I was amazed to see the volume of journalists’ ink spilt last week on the case of the student basketball star in Utah who was suspended from school for having pre-marital sex with his girlfriend (BBC News, Daily Mail)

Apparently his team has, as a result, slipped down the college rankings.

Some days ago there were 1,335 articles listed on google from all over the work that were listing the story.

Why such interest? I guess it is because pre-marital sex is so common nowadays that the media are surprised that an educational institution should take holding on to one’s virginity at all seriously.

And yet in the same week another story from across the pond ran with the headline ‘No sex please, we're American: More than a quarter of young men and women in the US say they're still virgins’.

Apparently promiscuity rates are falling in the US as a result of abstinence-based sex education.

Rather odd then that Health Minister Anne Milton (pictured) should be reported this week in a tweet from @BrookCharity (where she was speaking at a conference) as being opposed to abstinence based sex education: ‘Ann[e] Milton says the “Just say no” msg will not happen on her watch & we should contact her if we hear politicians say it.’ (Are the thought police about to discover a new ‘thought-crime’ I wonder – telling young people to wait before having sex?)

I wrote to her asking for an explanation but her office is now denying that she actually said it at all. So who is telling the truth?

The past government’s policy on preventing teenage pregnancy (condoms and morning after pills) has left us with a legacy of unplanned pregnancy, sexually transmitted disease, abortion and broken relationships.

Since TPIAG was set up in 1998 to halve the national under-18 conception rate by 2010, it has put most of its efforts into the promotion and provision to teenagers of the very contraceptives which, when they fail, then constitute the commonest reason for requesting abortion.

The IAGSH (March 2003) equally adopted an ideological approach which consistently ignored evidence-based practice, such as studies indicating that abstinence-only education programmes can reduce both teenage conception, abortion and STI rates.

The IAGSH published many inaccuracies. In September 2003, they claimed those who took a US 'abstinence pledge' were 'at higher risk of STIs…because they have often had little or no information about contraception and safer sex'. Not only was no evidence presented to support the reason given, but even the purported 'higher risk' of STIs was not shown by the actual research which consistently showed lower rates of STIs (though not statistically significantly so) among pledgers.

The vast majority of members of both TPIAG and IAGSH had declared interests in the contraceptive and abortion industries. Baroness Gould, the chair of both, was President of the fpa and chaired a pro-abortion lobby group in Parliament.

Like Baroness Gould, many of the members of one of these two 'independent' groups were also members of the other; whereas there were no representatives at all with any experience of alternative strategies such as the highly successful ABC programmes in Uganda or Love for Life programmes in Northern Ireland, where teenage pregnancy and STI rates are far lower than in England, Wales and Scotland.

The Coalition Government says it wants to work with charities and churches across the whole sepctrum. Supporting the work of groups like Love for Life would be a good step in the right direction.

Let’s hope that Anne Milton’s reported statement this week was in fact a misreport (rather than a Clintonesque ‘misspeak’) and that she is not taking us back into the darkness from which, with the help of the quango bonfire, we were starting to emerge.
Posted by Peter Saunders at 15:10