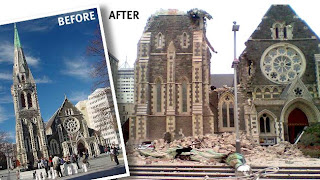 On 2 March I was privileged to be one of about 5,000 Kiwis in London who attended the memorial service in Westminster Cathedral, London, for victims of the 22 February Christchurch earthquake. It was amazing to be part of this gathering. The church was full half an hour before the service so I joined over 1,000 people outside.

We sang ‘How great thou art’ led by a Maori concert group and listened to messages from John Key, NZ prime minister, and Richie McCaw, All Black captain, before Hayley Westenra sang the first verse of the national anthem in Maori and English (see video).

It now seems that the final death toll of the disaster will be 182, making it New Zealand’s fourth greatest disaster after the Erebus crash (257), the Napier Earthquake (256) and the wreck of the Orpheus (189).

I was born in Christchurch, and still have friends, medical colleagues and second cousins living there – although thankfully all managed to escape injury.

This week, a service in Hagley Park, Christchurch, at which Prince William spoke was attended by tens of thousands and I have just learnt that there will be a further service at Westminster Abbey on Sunday 27 March.

On the same day, the Canterbury Crusaders (my home team!) will play the Natal Sharks at Twickenham, and, God willing, our family will be there. Over 60,000 (mainly Kiwis and South Africans) are expected at the match and £5 from each ticket is going to the Red Cross for earthquake relief. There will be a further act of remembrance preceding the game.

The Crusaders ground, the AMI stadium in Christchurch, has been so badly damaged that it is not able to host any of their home matches this tournament and will not even be available for the rugby world cup later this year.

The home of English rugby has therefore thankfully been made available for this clash of the titans between the Crusaders (seven times winners of the competition) and the Sharks, this year’s leaders (until last night!)

This will be the first ever super rugby series match to be played outside Australia, New Zealand or South Africa.

As we seek by God’s grace to make sense of this tragedy I am drawn back to the words of our own national anthem – which is itself a prayer.

Thomas Bracken wrote the words in the early 1870s, and offered a prize of 10 guineas for the best musical setting. This was won by Otago schoolteacher John Joseph Woods and the first ever performance was in 1876.

Most New Zealanders know the first verse by heart and many can also sing it in Maori. But not many know the other verses.

There is a lovely version with all five verses, sung by Cindy Ruakere, available in both word and picture versions on you tube which has been posted to honour the earthquake victims along with another brief video to the words of ‘My City in Ruins’ which captures something of the Kiwi resilience in the wake of tragedy.

I have pasted the full version of the anthem here – because I think it beautifully expresses the prayers of New Zealand Christians for our country. New Zealand is a nation, greatly privileged, and with a glorious past, but we have sadly in many ways turned our back on the God who has blessed us so much.

In many ways we still benefit from God’s blessings. New Zealand is a country of extraordinary natural beauty which enjoys a high standard of living. It was recognized as the least corrupt nation on earth in 2009. and shared the honours with Denmark and Singapore in 2010.

But in many other ways we have fallen and need a fresh touch of God’s Spirit.

My prayer is that in the wake of this disaster God will move in such a way that our nation really does become a light to the nations and is truly worthy of its own anthem.

I hope you will enjoy reading and reflecting on these words, and can make them your own prayer for New Zealand.

Peace, not war, shall be our boast,
But, should foes assail our coast,
Make us then a mighty host,
God defend our Free Land.
Lord of battles in thy might,
Put our enemies to flight,
Let our cause be just and right,
God defend New Zealand.

Let our love for Thee increase,
May Thy blessings never cease,
Give us plenty, give us peace,
God defend our Free Land.
From dishonour and from shame
Guard our country's spotless name
Crown her with immortal fame,
God defend New Zealand.

May our mountains ever be
Freedom's ramparts on the sea,
Make us faithful unto Thee,
God defend our Free Land.
Guide her in the nations' van,
Preaching love and truth to man,
Working out Thy Glorious plan,
God defend New Zealand.
Posted by Peter Saunders at 15:09