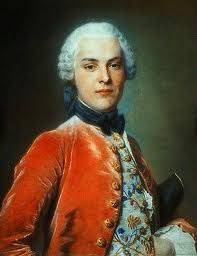 It’s been a difficult few days for Richard Dawkins.

On Tuesday 14 February, some critics branded him ‘an embarrassment to atheism’ after what many listeners considered a humiliation in a Radio 4 debate with Giles Fraser, formerly Canon Chancellor of St Paul's Cathedral.

Dawkins boasted that he could recite the full title of Charles Darwin's ‘The Origin of Species’, then when challenged, dithered and said: ‘Oh God.’

In today’s Sunday Telegraph there is an interesting article linking his family with the slave trade.

One of his direct ancestors, Henry Dawkins (pictured), amassed such wealth that his family owned 1,013 slaves in Jamaica by the time of his death in 1744.

And the Dawkins family estate, consisting of 400 acres near Chipping Norton, Oxfordshire, was bought at least in part with wealth amassed through sugar plantation and slave ownership.

One of his other relatives, James Dawkins, was an MP who voted in 1796 against Wilberforce's proposal to abolish the slave trade, helping to defeat it by just four votes. He is also believed to have been among just 18 MPs who supported an amendment to postpone the act's implementation by five years.

Dawkins is now facing calls to apologise and make reparations for his family’s past.

He has responded predictably, and with some justification, that he is not personally responsible.

But he has also taken the opportunity to lash out again against Christianity:

‘I condemn slavery with the utmost vehemence, but the fact that my remote ancestors may have been involved in it is nothing to do with me… For goodness sake, William Wilberforce may have been a devout Christian, but slavery is sanctioned throughout the Bible.’

The charge that the Bible sanctions slavery is a common one from Dawkins and his New Atheist colleagues but is actually groundless.

Contrary to what Christopher Hitchens and Sam Harris have said, the keeping of servants in ancient Israel can hardly be called ‘a warrant for trafficking in humans’ or a means of treating people ‘like farm equipment’.

As Paul Copan cogently argues in his recent book ‘Is God a moral monster?’, a mistake critics (like Dawkins and his friends) make is to equate ‘servanthood’ in the Old Testament with ‘prewar slavery’ in the US South.

An Israelite strapped for shekels could choose to become an indentured servant to pay off his ‘debt’ to a ‘boss’ or ‘employer’ (adon). But calling him a master is way too strong a term just as the term ‘ebed’ (servant, employee) should not be translated ‘slave’.

Servanthood in Israel was a voluntary (poverty-induced) arrangement used to ensure that indebted people’s welfare was provided for whilst debts were paid off. Once a servant was released, he was free to pursue his own livelihood without any further obligations, and under the sabbatical year arrangement all ‘servants’ were freed and forgiven their debts after seven years anyway.

In fact one scholar, JA Motyer, has written, ‘Hebrew has no vocabulary of slavery, only servanthood.’

In fact one might suggest that this system was far more just than our present one where people can declare themselves bankrupt, or waste millions as a banker gambling with other people’s money, and get off scot-free!

Furthermore, under Old Testament Law, injured servants had to be released (Exodus 21:26, 27), kidnapping a person to sell as a slave was punishable by death (Exodus 21:16, Deuteronomy 24:7) and Israelites were obliged to offer safe harbour to foreign runaway slaves (Deuteronomy 23:15, 16).

Contrary to Dawkins’ claims, these arrangements were far more protective of slaves than his own ancestors were. Stones? Glass houses?

But lest we are too quick to judge Dawkins for his ill-gotten inheritance and misrepresentation of the Bible, we should remind ourselves that the author of the hymn ‘Amazing Grace’, John Newton, was once a slave-trader... who repented.

And we all fall short of God’s grace... and all have ancestors and relatives who have done questionable things.

Perhaps there is hope for Dawkins yet!

Amazing grace! How sweet the sound
That saved a wretch like me.
I once was lost, but now am found,
Was blind but now I see.
Posted by Peter Saunders at 07:44