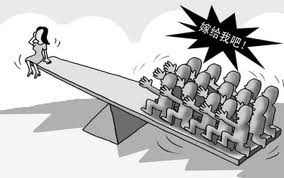 Sex-selective abortions have led to severe gender imbalance in China, India and South Korea according to a new report published this week. Furthermore, as I argue below, the British government has contributed to this problem through its financial and ideological support for abortion abroad.

In the next 20 years in large parts of China and India, there will be a 10% to 20% excess of young men because of sex selection and this imbalance will have societal repercussions, states an analysis in CMAJ (Canadian Medical Association Journal).

A preference for sons in China, India and South Korea combined with easy access to sex-selective abortions has led to a significant imbalance between the number of males and females born in these countries.

The sex ratio at birth (SRB) - the number of boys born to every 100 girls - is consistent in human populations in which about 105 males are born to every 100 females. However, with the advent of ultrasounds that enable sex-selection, the sex ratio at birth in some cities in South Korea climbed to 125 by 1992 and is over 130 in several Chinese provinces from Henan in the north to Hainan in the south.

In 2005 in China, ‘it was estimated that 1.1 million excess males were born across the country and that the number of males under the age of 20 years exceeded the number of females by around 32 million,’ writes Professor Therese Hesketh, UCL Centre for International Health and Development, London, United Kingdom with co-authors.

In India, similar disparities exist, with sex ratios as high as 125 in Punjab, Delhi and Gujarat in the north but normal sex ratios of 105 in the southern and eastern states of Kerala and Andhra Pradesh.

The societal implications mean that a significant percentage of the male population will not be able to marry or have children because of a scarcity of women. In China, 94% of unmarried people aged 28 to 49 are male, 97% of whom have not completed high school, and there are worries the inability to marry will result in psychological issues and possibly increased violence and crime.

Policy makers in China, India and South Korea have taken some steps to address the issue, such as instituting laws forbidding fetal sex determination and selective abortion, but these incipient declines will not filter through to the reproductive age group for another two decades, conclude the authors.

What you will not learn from the report is the extent to which the British government, by financing the very abortion providers who have created this population imbalance, has contributed to this sorry state of affairs.

In response to a parliamentary question from Baroness Masham in January 2003 it was confirmed that the British Government, through its Department for International Development, gave £150 million to support international abortion providers over the period 1997-2002.

UNFPA also funds International Planned Parenthood Federation (IPPF), one of the leading global abortion promoters in the world. MSI is another.

The government made clear in its reply at the time that ‘DfID's funding policy to any non-profit making organisation or network, including Marie Stopes International, is based on its ability to effectively contribute to the achievement of the Millennium Development Goals; and to DfID's overall objective, the eradication of poverty’.

So here we have again the myth propagated by the DFID that maternal mortality is effectively lowered by the provision of ‘safe’ abortion, a false presupposition which raised its head again in its recent Consultation on Maternal Health Strategy: 'Choice for women: wanted pregnancies, safe births'.

As I have pointed out in two previous blogs (one on the DFID consultation itself and one on Chile’s programme) maternal deaths worldwide have in fact fallen from 500,000 to 343,000 between 1990 and 2008. This has nothing to do with abortion.

Our CMF submission to the DFID points out that the real solution to reducing maternal mortality is multi-level: addressing social attitudes, education and empowerment of women, good quality obstetric/midwifery care and better birth spacing.

Furthermore this is best achieved through positive engagement with religious leaders, communities and faith based organisations (FBOs). This is what the British government needs to put more energy into doing.

Sadly, however, the severe gender imbalance in China has been in part financed by the British government using British taxpayers’ money and based on a false understanding of the real causes of maternal mortality.
Posted by Peter Saunders at 11:58