The GMC has overreacted in reprimanding Dr Richard Scott 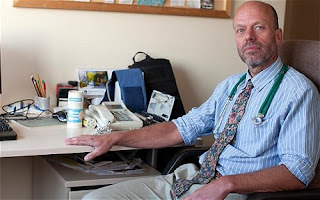 A Christian GP has been reprimanded by the General Medical Council for talking about his faith to a patient.

Dr Richard Scott (pictured) was accused of ‘harassment’ and told by the medical regulator that he risked bringing the profession into disrepute by discussing his religious beliefs.

He has refused to accept a formal warning on his record, and is instead taking legal action to fight the censure with the assistance of the Christian Legal Centre and leading human rights lawyer Paul Diamond.

Dr Scott, who says he has shared his faith with thousands of patients in the past, saw the patient who is at centre of the complaint in 2010. Following the consultation, the patient’s mother complained that the doctor had abused his position by ‘pushing religion’ on her son.

However, Dr Scott argues that he acted within official guidelines, having asked if he could talk about his Christian beliefs to the patient, who is of a different faith, and having ended the conversation as soon as he was asked to. The conversation only turned to faith issues after they had fully explored the medical options.

This is Dr Scott’s version of what happened. “The GMC said I had exploited a vulnerable patient. I say I was trying to help a needy patient,” Dr Scott told the British Medical Journal.

'It’s actually one of the longest consultations I’ve had, 20 minutes, trying to establish the details of his very detailed problem. And then in the last five minutes I said to him, "Look, there’s something here that I’ve found over the years has been very helpful to me and many of the patients sat in your chair. It’s about the Christian faith; you probably realise I’m a Christian doctor."'

He asked the patient whether he could discuss this, and he had replied, 'Go for it.'

'Towards the end he actually did become a little bit heated and I could see it wasn’t going anywhere, so we stopped. I finally said, "I will do the things obviously your mother has rung up about in the first place, the standard medical stuff, we’ll do that." In her complaint against me she said that I’d been highly unprofessional and not done anything medical at all in the conversation, which is totally wrong and can be proved on the computer.'

After receiving the complaint, the GMC apparently sent Dr Scott a letter warning him over his conduct and told him that the way he expressed his religious beliefs had ‘distressed’ the patient and did ‘not meet with the standards required of a doctor’.

Dr Scott, a doctor for 28 years, works at the Bethesda Medical Centre in Margate, Kent. Its six partners are all Christians and state on the official NHS Choices website that they are likely to discuss spiritual matters with patients during consultations.

Niall Dickson, chief executive of the GMC, is reported by the Telegraph as saying: ‘Our guidance, which all doctors must follow, is clear. Doctors should not normally discuss their personal beliefs with patients unless those beliefs are directly relevant to the patient’s care. They also must not impose their beliefs on patients, or cause distress by the inappropriate or insensitive expression of religious, political or other beliefs or views.’

However Dickson has been quite selective in his quotation of the guidance which actually gives doctors a lot of freedom in expressing their faith, provided they do it in an appropriate and sensitive way.

The GMC guidance in question, Personal beliefs and medical practice, was published on 17 March, 2008.

Christian Medical Fellowship contributed to the consultation leading to its publication and published a review of the guidance at the time.

At the time of the publication of the guidance Dr John Jenkins, Chair of the GMC Standards and Ethics Committee said: ‘The GMC recognises that personal beliefs, values, and cultural and religious practises are central to the lives of doctors and patients. The guidance balances a doctors' right to practise in accordance with their views and beliefs, and patients' right to receive timely and appropriate medical care.’

The guidance states specifically (para 7) that it ‘attempts to balance doctors' and patients' rights - including the right to freedom of thought, conscience and religion, and the entitlement to care and treatment to meet clinical needs - and advises on what to do when those rights conflict.’ It is not intended to ‘impose unnecessary restrictions on doctors’ (p8) but does point out that doctors have an obligation not to impose their beliefs on patients:

‘You must not express to your patients your personal beliefs, including political, religious or moral beliefs, in ways that exploit their vulnerability or that are likely to cause them distress.’ (p1)

So there is no blanket prohibition on expressing personal beliefs, as long as it is done in a way that is sensitive and appropriate.

The guidance also underlines the principle that doctors must ‘make the care of (their) patient (their) first concern’ and must treat them ‘with respect, whatever their life choices and beliefs’.

These are all good principles that I personally have no problem with. No doctor, Christian or otherwise, should impose his views on his patient or seek to exploit his or her position.

However, the guidance goes on to stress that all patients and doctors have personal beliefs implying that these principles apply not just to those who subscribe to a particular faith, but to everyone.

‘Personal beliefs and values, and cultural and religious practices are central to the lives of doctors and patients.’ (p4) ‘All doctors have personal beliefs which affect their day-to-day practice.’ (p6)

It also emphasises that taking account of patients’ beliefs is part of good medical care.

‘Patients' personal beliefs may be fundamental to their sense of well-being and could help them to cope with pain or other negative aspects of illness or treatment.’ (p5) ‘For some patients, acknowledging their beliefs or religious practices may be an important aspect of a holistic approach to their care. Discussing personal beliefs may, when approached sensitively, help you to work in partnership with patients to address their particular treatment needs.’ (p9)

I recently blogged about a new report from CMF, which has had wide international news coverage which reviews the positive health benefits of Christian faith.

Good doctors do not treat their patients solely as biological or biochemical machines. Rather they practise ‘whole person’ medicine that is not concerned solely with physical needs, but also addresses social, psychological, behavioural and spiritual factors that may be contributing to a person’s illness.

Here we have the case of a doctor who has talked to many patients about faith matters and who has had only a very small handful of complaints. He seems genuinely to make his patients welfare his main concern, and when he feels it appropriate to raise spiritual issues does so with sensitivity and respect.

From the facts of the case, as reported, it appears that the General Medical Council has acted with inappropriate and disproportionate force and appears to have applied its (very reasonable guidance) in a selective and unbalanced way.

The Telegraph, in today’s editorial, ‘Doctors can be Christians too’, quite rightly says that ‘this case of a doctor reprimanded for discussing his religion is a worrying one’ and accuses the GMC of an ‘excessive reaction’. It concludes that ‘we appear to be heading towards an alarming situation in which the profession of faith becomes an active disqualification’.

The GMC has clearly overreacted and I am on record in the Telegraph today saying just this.

Let’s hope that it reassesses its position and applies its own guidance in an even-handed way by balancing more carefully what it calls ‘the right to freedom of thought, conscience and religion’ with ‘the entitlement to care and treatment to meet clinical needs’.

If it fails to do so it may find itself losing more than its credibility.
Posted by Peter Saunders at 09:29

Email ThisBlogThis!Share to TwitterShare to FacebookShare to Pinterest
Labels: Evangelism, faith and health