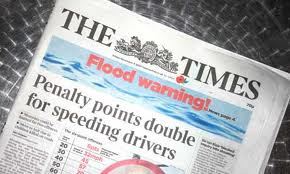 The Times newspaper has today devoted two whole pages and an editorial to the pro-assisted suicide cause just as Dignity in Dying (formerly the Voluntary Euthanasia Society) is launching its latest propaganda barrage on parliament with the mailing of a new booklet to all MPs and Peers.

The Times initially adopted a campaigning stance in support of legalising assisted suicide with an editorial titled ‘Life and Death’ at the time of the unsuccessful Falconer amendment to the Coroners and Justice Bill back in 2009. Like the BBC it has been unbalanced in its coverage of the issue ever since. The pro-euthanasia lobby is indeed fortunate to have such a powerful press office assisting it.

They are doing this in the lead up to the publication of the report from Lord Falconer’s sham commission on assisted suicide due out this autumn, which on the basis of the committee’s composition (nine of its twelve members are outspoken enthusiasts for decriminalisation) will recommend ‘legalisation with safeguards’. Expect DID to have the bill already drafted.

DID’s aim is to produce a slight opening of the door that can then be incrementally widened with subsequent human rights legislation – because as they are well aware, their key arguments (compassion and autonomy) apply also to children, mentally incompetent adults and those who are disabled or chronically ill. This is just the sort of extension that has already been observed in the Netherlands.

Baroness Finlay, professor of palliative medicine in Cardiff, has tonight published a riposte, ‘”Safeguards” will not make assisted suicide acceptable’, in which she makes the following points:

‘Those campaigning for assisted suicide make it all sound so easy: safeguards, no investigation of those who assist and an assumption that everyone involved acts from the finest of motives.’

‘But the law has to protect us all from those who do not necessarily have the best motives…So why are the so-called “safeguards” proposed by campaigners unsafe? First, they assume that one can define precisely who is terminally ill: one cannot. Doctors know only too well of misdiagnoses and prognoses that are wrong by months or years. Second, coercive influences on a person are difficult to detect. Third, doctors and nurses often have a big influence on a patient…’

‘When assisted suicide is investigated, those who stand to inherit should be rigorously examined if they are complicit in the death… We are all interconnected. The actions of one person affect others. Assisting suicide is a step too far; personal gain too easily masquerades as compassion.’

The current law, through the penalties it holds in reserve, provides a strong deterrent to abuse and exploitation, whilst allowing both prosecutors and judges discretion in bringing prosecutions and in passing sentences. This is the right balance. It is working well and does not need fixing.

The set of prosecution criteria produced by the Director of Public Prosecutions in response to the Debbie Purdy judgement are not perfect in that they provide a loophole for those who plead that their actions, in assisting someone else to kill themselves, were ‘wholly motivated by compassion’ – words which have little meaning in law and are also difficult to apply given that the key witness – the victim – is dead.

In fact, as argued by Francis Bennion, retired Parliamentary Counsel, in a letter to the Times well worthy of study, these prosecution guidelines actually in this way change the law.

However, were we to legislate to decriminalise assisted suicide on any grounds at all we would soon see the escalating numbers of cases that we are seeing now in Oregon and the Netherlands.

Britain has seen a total of 150 people go to the Dignitas facility in Zurich to end their lives over ten years – on average about ten a year.

However with an Oregon or Netherlands type law (both defended by DID) we would, according to the 2005 House of Lords Select Committee Report, have 650 and 13,000 British deaths annually.

We do not need a change in the law – but we do need to ensure that all cases of assisted suicide do continue to be fully investigated both to ensure that potential abusers are deterred and that all appropriate prosecutions are brought. This will mean that ‘assisters’ will have to be questioned by the police, but that is a small price to pay to ensure that others are protected.

In order to ensure that vulnerable people – those who are elderly, disabled, depressed or sick – are adequately protected it means that a small number of people who desperately wish help to end their lives will not be able to do it and that others will not be able to help them without the risk of prosecution.

That is part of living in a democratic society. Autonomy is not absolute. All laws limit autonomy in some way because laws are there to protect the vulnerable, not to give liberties to the determined. That is why we have speed limits and breath tests – despite the fact that some people think they can drive safely over either limit.

The current law has a stern face but a kind heart. It does not need changing. It is a shame that the current editors of the Times seem not to recognise that.
Posted by Peter Saunders at 16:13