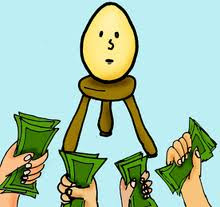 There are two stories about egg donation in the papers this week.

First is the HFEA’s drive to recruit sperm and egg donors. Apparently it is bringing together a National Donation Strategy Group to look at how to ‘raise awareness’.

The BBC gives an advertorial gloss to the story but the Daily Mail tells us that the payment to women donating their eggs for use in IVF has tripled from £250 to £750 this week and that the extra money on offer is said to have led to a five-fold increase in women approaching clinics to donate their eggs to infertile couples.

Under the change, egg donors will be given free treatment to retrieve the eggs plus a payment of £750 per cycle, no matter how many eggs are collected. Tempting during a recession and the question has to be asked, ‘how many of these women would choose not to take the risk if it were not for the money?’

It is noteworthy that the infertility industry in the United States has now grown to a multi-billion dollar business, its main commodity being human eggs. Young women all over the world are solicited by ads—via college campus bulletin boards, social media, online classifieds—offering up to $100,000 for their ‘donated’ eggs, to ‘help make someone’s dream come true.’

Second is the news that scientists in Edinburgh are intending to seek permission from the HFEA to fertilise eggs grown in a laboratory from stem cells. The tests are understood to be aimed at eventually generating an unlimited supply of human eggs that could assist women to have babies later in life.

Stories like these of course make alluring headlines and journalists reproducing uncritical press releases from those with vested interests seldom ask questions about the deeper ethical issues around egg donation – such as the health dangers of egg harvesting, the huge numbers of human embryos destroyed in the process of refining new techniques and the problem of children with confused identities and parentage as a result.

Even less do they ask the ‘elephant in the room’ question of why there is such a huge demand for donated eggs in the first place, but it is precisely that which I want to shed some light on.

The primary problems driving egg donation are the rising incidence of infertility and the huge decrease in babies available for adoption.

Infertility is the most common reason for women aged 20–45 to see their GP, after pregnancy itself. It is estimated to affect around one in six or one in seven UK couples – approximately 3.5 million people – at some point.

The latest figures (2009) show that 25.2% of IVF treatments using a woman's own fresh eggs resulted in a live birth but infertility in women is strongly linked to age.

The following figures give the average success rate for IVF and ICSI treatment using a woman’s own fresh eggs in the UK in 2009. 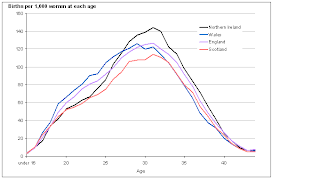 Add to that the fact that women are delaying childbirth and having babies later and later and we see why there is such a high demand for IVF and donor eggs. In England and Wales, the average age at first birth was around 24 during the 1960s, compared with around 28 in 2009 (see graph of maternal age at birth in 2010).

Along with the increase in infertility there are fewer and fewer babies for adoption for two main reasons – abortion (which kills babies that might otherwise have been adopted) and state support for single parent families (which means that babies that would have previously been given up for adoption now are not).

There is currently only one baby adoption in the UK for every 2,235 abortions.

The new adoption tsar has tried so far unsuccessfully to promote adoption as an alternative to abortion but an in depth examination of UK adoption data reveals the following:

The number of abortions on UK residents in 1968, the first full year after legalisation was 23,991. I can’t find an adoption number for that year but suspect it was considerably higher than 22,000.

There are also now three million children living in a single parent household (23% per cent of all dependent children).

Just over a quarter (26 per cent) of households with dependent children are single parent families, and there are 2 million single parents in Britain today. About half of these had their children outside marriage.

So when you next read about egg donation, before jumping on the bandwagon and trumpeting it as a wonderful advance remember the deeper ethical issues (embryo destruction, health risks of harvesting, confused identities and commercial exploitation) and the societal changes (abortion, delayed childbirth and single parenthood) which have contributed to the demand.
Posted by Peter Saunders at 12:43