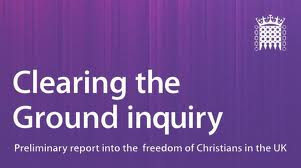 Earlier this year Christians in Parliament, an official All-Party Parliamentary Group (APPG), chaired by Gary Streeter MP, launched an inquiry called ‘Clearing the Ground’, which was tasked with considering the question: ‘Are Christians marginalised in the UK?’

The inquiry was facilitated by the Evangelical Alliance and the report was published in February 2012. (You can read the executive summary here)

The inquiry’s main conclusion was that ‘Christians in the UK face problems in living out their faith and these problems have been mostly caused and exacerbated by social, cultural and legal changes over the past decade.’

I gave both written and oral evidence to the inquiry and part of my oral evidence is quoted in the report. Unfortunately my written evidence was not acknowledged or included, I suspect due to an administrative error but it is available on the CMF website.

I have pasted below the answers I gave to two key questions in the report.

With the rise of the secular humanism and, in particular, the new atheism, there is in British society generally a loss of historically held belief in the existence of a transcendent communicating God incarnate in Jesus Christ, in biblical authority and in biblical ethics, which is combined with an active agenda to impose an alternative secular world view through our laws, institutions and media. This is leading to an erosion of laws that were based on a biblical worldview and to some loss of Christian freedoms.

Conflicts arise when Christians are:

These are the key issues in public life not because they are more important than other areas of Christian faith and practice but because they are the specific areas where recent laws, or regulations/guidelines based on those laws, have impacted.

The main laws implicated are:

1. Employment Equality regulations on religion and belief and sexual orientation (2003)
2. Equality Acts 2006 and 2010
3. Section 5 of the Public Order Act (less applicable to Christian doctors)
4. The Abortion Act 1967 and Mental Capacity Act 2005 also have some influence through interpretation by official bodies about the scope and application of their provision for conscientious objection.

Guidelines based on these laws by the Department of Health, NHS trusts and professional bodies like the GMC and BMA also have an impact on how legal policy is interpreted and implemented. Examples of such guidelines include:

Which specific aspects of law, or its interpretation, do you consider unfair?

1. The Employment Equality regulations on religion and belief and sexual orientation (2003) and the Equality Acts 2006 and 2010
A. The requirement for Christian organisations with a Christian ethos to employ people who either do not hold to Christian faith
B. The definition of harassment is too broad and too open for misinterpretation or perverse action: ‘unwanted conduct which takes place with the purpose or effect of violating the dignity of a person and of creating an intimidating, hostile, degrading or humiliating environment.’

2. The Department of Health practical guides on ‘religion and belief’ and ‘sexual orientation’ over-interpret the law with respect to evangelism and expression of Christian belief about sexuality and have created an environment where normal Christian behaviour is inappropriately open to censure or discipline. These documents were not made open to full consultation or review when implemented but are being used by NHS employers. Both these documents should be reviewed and opened to consultation.Examples of problematic clauses are given below.

3. The implementation of the Abortion Act 1967 and Mental Capacity Act 2005 conscientious objection clauses needs to be kept under regular review to ensure that Christians are not being unlawfully discriminated against.

Examples of problematic clauses in Department of Health documents which can be used to discriminate against Christians:

Members of some religions... are expected to preach and to try to convert other people. In a workplace environment this can cause many problems, as non-religious people and those from other religions or beliefs could feel harassed and intimidated by this behaviour… To avoid misunderstandings and complaints on this issue, it should be made clear to everyone from the first day of training and/or employment, and regularly restated, that such behaviour, notwithstanding religious beliefs, could be construed as harassment under the disciplinary and grievance procedures.(Department of Health, Religion and Belief)

Any NHS employer faced with an employee who by virtue of religion or belief refuses to work with or treat a lesbian, gay or bisexual person, or who makes homophobic comments or preaches against being lesbian, gay or bisexual, should refer to its anti-discrimination and bullying and harassment policies and procedures, which should already be in place… If the conduct has the purpose or effect of violating a person’s dignity, or creating an intimidating environment, and it is reasonable for the complainant to take offence, then it is harassment. (People) should not be subjected to discrimination or harassment on any grounds whatsoever. It should be made clear that such behaviour is unlawful and could result in legal proceedings being brought. (Department of Health, Sexual Orientation)
Posted by Peter Saunders at 07:33