The real meaning of the tarot – 'The High Priestess' 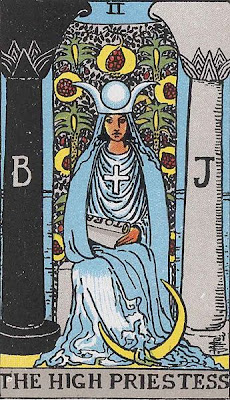 It is far better to seek to understand their symbolism and the ancient wisdom that lies behind it because this wisdom tells us how to make sense of the world and live in it.

I have already explained the rich symbolism behind the ‘Wheel of Fortune’ card and ‘The Lovers’ and move now to the ‘High Priestess’.

In this card we see a robed female figure sitting with a rolled scroll in front of a curtain slung between two pillars.

In order to identify the true identity of the woman, the scroll she is holding, the significance of her clothing and the curtain we need to start with the two pillars which bear the English letters J and B.

As with the wheel of fortune card, in order to understand the symbolism we need to go to the symbolism in the Old and New Testaments of the Bible.

In 1 Kings 7:13-22 (read the whole account here) we read about the construction of the Israelite King Solomon’s Temple in Jerusalem in about 830 BC.

‘King Solomon sent to Tyre and brought Huram, a skilled craftsman in bronze...He cast two bronze pillars, each eighteen cubits high and twelve cubits in circumference. He also made two capitals of cast bronze to set on the tops of the pillars... He erected the pillars at the portico of the temple. The pillar to the south he named Jakin and the one to the north Boaz.’

So the letters J and B identify the pillars as Jakin and Boaz and the structure as Solomon’s Temple.

The scroll the woman is holding bears the four letters TORA but the word is actually TORAH, the H being hidden by a fold of the woman’s garment.

TORAH, or law, refers to the Pentateuch or the first five books of the Old Testament – Genesis, Exodus, Leviticus, Numbers and Deuteronomy.

And it is the second of these books, Exodus which gives us the explanation of the curtain slung between the two pillars.

Exodus 26:31-34 describes this curtain as follows:

‘Put the altar in front of the curtain that shields the ark of the covenant law—before the atonement cover that is over the tablets of the covenant law—where I will meet with you… Once a year Aaron shall make atonement on its horns. This annual atonement must be made with the blood of the atoning sin offering for the generations to come. It is most holy to the Lord.’

The High Priest Aaron was only able to enter the Holy Place within the temple once a year to make a sacrifice for the sins of his people. He did this by shedding the blood of an animal. The curtain tells us that there is a barrier preventing human beings meeting with God because of their sin.

So what then of the woman? The fact that she is sitting outside the curtain in the temple and holding the Torah suggests that she is the nation of Israel, and this is confirmed by the presence of a sickle moon at her feet.

Again the Bible holds the key to this interpretation Revelation 12 in the New Testament of the Bible:

‘A great sign appeared in heaven: a woman clothed with the sun, with the moon under her feet… She gave birth to a son, a male child, who “will rule all the nations with an iron scepter.” And her child was snatched up to God and to his throne….The woman was given the two wings of a great eagle, so that she might fly to the place prepared for her in the wilderness…’

The reference to the two eagles’ wings identifies the woman with the moon at her feet as the nation of Israel. The clue is in Exodus 19:3,4 where God tells the Israelite leader Moses:

‘This is what you are to say to the descendants of Jacob and what you are to tell the people of Israel: “You yourselves have seen what I did to Egypt, and how I carried you on eagles’ wings and brought you to myself.”’

Israel was delivered out of slavery in Egypt into a desert or wilderness on the way to Canaan (Palestine) in about 1446 BC.

Revelation 12 goes on to tell us that ‘the dragon’ who is identified in verse 9 of that chapter is ‘that ancient serpent called the devil, or Satan, who leads the whole world astray’.

You may recall that this serpent, who appears in the Garden of Eden in Genesis 3 in the Old Testament, is also depicted in two cards I have already reviewed – ‘The Wheel of Fortune’ and ‘The Lovers’.

So who is the male child of the woman? The cross on her breast identifies this as Jesus Christ, descended from Israel, who died on a cross.

And it is the cross that is the real key to bringing all the items in the card together.

Hebrews 9:3-8 in the New Testament tells us that:

‘Behind the second curtain was a room called the Most Holy Place which had the golden altar of incense and the gold-covered ark of the covenant. This ark contained the gold jar of manna, Aaron’s staff that had budded, and the stone tablets of the covenant… But only the high priest entered the inner room, and that only once a year, and never without blood, which he offered for himself and for the sins the people had committed in ignorance. The Holy Spirit was showing by this that the way into the Most Holy Place had not yet been disclosed…’

‘But when Christ came as high priest… he entered the Most Holy Place once for all by his own blood, thus obtaining eternal redemption.’

Jesus Christ’s entry beyond the curtain surpassed that of the High Priest in three ways: he shed his own blood not that of an animal; this action dealt with the sins of all people once and for all not just the people of Israel at a particular time in history; the redemption (or rescue) that was won was eternal (for ever) and not temporary.

When Jesus Christ died on a Roman cross in about AD 29 the curtain in the temple was torn from top to bottom by a supernatural force (See Matthew 27:51, Mark 15:38 & Luke 23:45) showing that through Jesus’ death on the cross all human beings now had access to a restored relationship with God.

It is up to us to make a response to God’s completed offer of reconciliation.