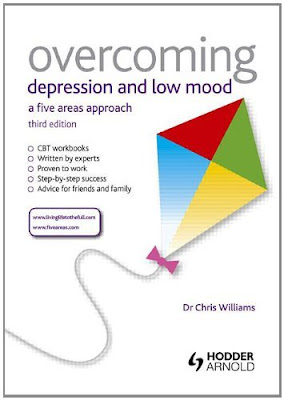 A top health story on the BBC this last week has highlighted a new study showing that prescribing self-help books on the NHS is an effective treatment for depression.

Patients offered books, plus sessions guiding them in how to use them, had lower levels of depression a year later than those offered usual GP care.

The effect was seen in addition to the benefits of other treatments such as antidepressants.

The BBC summarises the findings as follows:

‘More than 200 patients who had been diagnosed with depression by their GP took part in the study, half of whom were also on antidepressant drugs.

Some were provided with a self-help guide dealing with different aspects of depression, such as being assertive or overcoming sleep problems.

Patients also had three sessions with an adviser who helped them get the most out of the books and plan what changes to make.

After four months those who had been prescribed the self-help books had significantly lower levels of depression than those who received usual GP care.

A year later, those in the self-help group were more likely to be keeping on top of their depression.’

Study leader Prof Christopher Williams, from the University of Glasgow, who also wrote the books under the series title ‘Overcoming Depression and Low Mood’, said the guided sessions were the key to getting people engaged.

The sessions can be delivered in general practice without referral to a specialist, taking pressure off waiting lists.

In Scotland, a telephone support service has now been set up to help support those using the books, which can be freely copied and disseminated.

You can read the full study itself on Plos one

This is an extraordinary breakthrough given the high incidence of depression, the expense of treating it with drugs and the huge waiting lists for CBT (cognitive behavioural therapy) on the NHS.

Self-help books give GPs a third effective referral avenue (after CBT and drugs) that is cheap, effective and readily accessible.

Dr Paul Blenkiron, consultant in adult psychiatry at Leeds and York Partnership NHS Foundation Trust, said the results showed that guided self-help is effective and is ‘something the NHS should be investing in’.

He is currently advising on behalf of the Royal College of Psychiatrists, on a National Books On Prescription Scheme, to be rolled out across UK public libraries this year.

It is unfortunate that the BBC article doesn’t provide links to the actual books used in the study but Professor Williams was using his own ‘Five Areas’ series.

The key title ‘Overcoming Depression and Low Mood’ can be purchased on Amazon for £22.29 and for £21.99 on the Five Areas website. It is also available in Polish and Dutch.

You can also buy individual booklets - ten for just £15 via the website - or pick and choose from such provocative titles as ‘Ten things you can do to feel happier straight away’, ‘I can’t be bothered doing anything’ and ‘How to fix almost anything’.

There is a massive range of titles which apply the principles to various destructive patterns of thought and behaviour.

A clinicians guide to using the ‘Five Areas’ approach sells on Amazon for £23.74 but is available via Amazon from other suppliers for as little as £17-18.

Every GP practice should make sure that it has at least one.

Christian readers will be interested to know that Professor Williams is also a Christian and has written a similar book for Christians called ‘I’m not supposed to feel like this’ which provides a Christian view on anxiety and depression, and is written for sufferers and their carers as well as providing practical help for church leaders.

An empowering and practical response to feelings of depression, this book is in the style of a workbook, with constant reference to the Bible and the example of Jesus.

You can read a review by a Christian psychiatrist here.

Jesus Christ said that the truth would set us free and the Apostle Paul talked about ‘taking thoughts captive’.

CBT and self-help books build on just these principles – helping people to reject self-destructive and enslaving thought patterns and to think and act in ways that lead to freedom and flourishing.

This particular series is both biblically sound and evidence based.