The peril of the circular argument – for both Christians and unbelievers 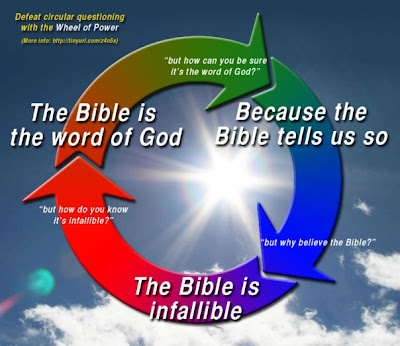 A common accusation levelled against Christians by unbelievers is that we present a circular argument in the way we discuss the authority of the Bible.

On the one hand we say that Jesus is the Son of God and produce proof texts from the Bible to make our point.

When they reply that they don’t accept the authority of the Bible we then produce sayings of Christ to prove that the Bible is Word of God – from the Bible itself!

The argument is circular. It’s analogous to Muslims saying that we must accept the authority of the Qur’an because it came from Muhammad who is a prophet, and that we know he is a prophet because the Qur’an says he is. But if you can’t accept the premise then you can’t get into the circle.

One reason Christians get into this predicament is that it was the Apostle Paul's usual practice to persuade Jews by reasoning with them from the Old Testament Scriptures that Jesus was the promised Messiah and Son of God.

The Jews however believed these Scriptures to be inspired and authoritative. Paul had a very different approach addressing Gentiles (Acts 14 & 17). His theology remained biblical without presuming that Bible texts should be the final court of appeal.

A second reason Christians tie themselves in knots is because they don’t think clearly about the real object of Christian belief. We are asking people primarily to put their trust in a person, Jesus Christ, not a book.

As a Christian I believe the Bible to be the Word of God. But I don’t expect unbelievers to accept that.

Similarly we believe in the authority of the New Testament Scriptures because we believe that Jesus commissioned the apostles to write them and guided them in the process (see argument here).

But it is not necessary for unbelievers to believe that the New Testament documents (including the four Gospels) are God-breathed Scripture in order to assess the force of our argument about Jesus.

The argument flows instead from the fact that they contain eye-witness testimony about Jesus and our appeal to them, in the first instance, is not as authoritative Scripture, but as credible historical documents.

Unbelievers cannot reasonably deny that these documents were written in the first century and we can produce compelling evidence that these writings have survived the centuries essentially as they were written.

They describe the amazing figure of Jesus of Nazareth, who gave the world a body of teaching which is there for everyone's evaluation. He is described as an exemplary character who practised what he preached. He is said to have performed amazing deeds, and his sayings are shot through with the most extraordinary claims he made about himself. The events of his life are said by eye-witnesses, who later became his followers, to have climaxed not only in his death but in his resurrection.

The whole saga, because of the importance of his teaching, the example of his character, his astonishing claims and the impact he had made on the world's stage, demands evaluation from every thoughtful responsible person. They may conclude that the whole story is invention, but history is not on their side.

So Christians need to avoid using the circular argument and instead argue from the historical accounts about Jesus that he was in fact who he claimed to be.

And unbelievers need to take on board that they do not have to first accept that the New Testament documents are Scripture in order to make an assessment of whether or not Jesus was the Son of God.

The Gospel accounts do not actually claim to be God-breathed Scripture, just to be credible historical accounts of what Jesus said and did. So let’s allow unbelievers to start from this point and see what conclusions they draw.

‘Many have undertaken to draw up an account of the things that have been fulfilled among us, just as they were handed down to us by those who from the first were eyewitnesses and servants of the word. With this in mind, since I myself have carefully investigated everything from the beginning, I too decided to write an orderly account for you, most excellent Theophilus, so that you may know the certainty of the things you have been taught.’ (Luke 1:1-5)

‘Jesus performed many other signs in the presence of his disciples, which are not recorded in this book. But these are written that you may believe that Jesus is the Messiah, the Son of God, and that by believing you may have life in his name.’ (John 20:30-31)

2.Has the Bible been corrupted?

3.Is Jesus Christ the only way to God?

4.Is the Bible reliable?