Silencing the Sirens - A lesson from Greek mythology about resisting temptation 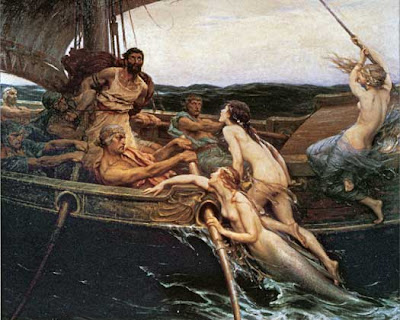 In Greek mythology, the Sirens were dangerous and devious creatures, portrayed as femmes fatales who lured nearby sailors with their enchanting music and voices to shipwreck on the rocky coast of their island.

Odysseus was curious as to what the Sirens sang to him, so, on Circe's advice, he had all of his sailors plug their ears with beeswax and tie him to the mast.

He ordered his men to leave him tied tightly to the mast, no matter how much he would beg.

When he heard their beautiful singing, he ordered the sailors to untie him but they bound him tighter and would not release him until they had passed out of earshot.

In Argonautica, Jason had been warned by Chiron that Orpheus would be necessary in his journey. When Orpheus heard the Sirens’ voices, he drew out his lyre and played his music more beautifully than they, drowning out their voices.

By the fourth century, when pagan beliefs were vanquished by Christianity, belief in literal sirens was discouraged but Sirens continued to be used as a symbol for the dangerous temptation embodied by women regularly throughout Christian art of the medieval era.

Odysseus and Orpheus both demonstrate valid approaches to temptation.

Odysseus did not trust either himself or his men to withstand it so blocked out its source (earplugs) and arranged things so he was unable to respond even though he found it overwhelming. He also enlisted his men’s help, so that when his own resistance failed him, they were able to keep him out of harm’s way.

Jesus metaphorically points to a similar approach when he calls his disciples to cut out of their lives those things which cause them to sin. Joseph also took this route with Potiphar’s wife, running from the house to escape temptation.

Orpheus on the other hand countered temptation by playing music better than that of the Sirens themselves. He drowned out the overwhelming desire by diverting Jason’s men’s attentions with something even more desirable.

There is a popular Christian song which underlines just this approach.

‘Turn your eyes upon Jesus, Look full in his wonderful face, And the things on earth will grow strangely dim, In the light of his glory and grace’.

Filling our minds with thoughts of Jesus – his character, power and beauty – makes all other passions fade into darkness in comparison.

The writer of Hebrews tells us that Jesus himself, who ‘has been tempted in every way, just as we are—yet he did not sin’ (4:15), ‘endured the cross, scorning its shame’ because of ‘the joy set before him’ (12:2).

In other words, even in Gethsemenae and on the path to the cross, he reminded himself of what his death and resurrection was going to achieve in saving sinners and the joy of it drove him on through the rejection and pain. He was doing it for us.

So, as the writer of Hebrews encourages us, ‘Let us then approach God’s throne of grace with confidence, so that we may receive mercy and find grace to help us in our time of need.’ (4:16)

And we have God’s promise in 1 Corinthians 10:13 (one of the first five memory verses in the Navigators’ memory pack) that God provides a way out with every temptation:

‘No temptation has overtaken you except what is common to mankind. And God is faithful; he will not let you be tempted beyond what you can bear. But when you are tempted, he will also provide a way out so that you can endure it.’

That way of escape might be blocking out the tempting perception or arranging friends to look out for us – like Odysseus - or drowning it out with the sheer joy of a greater godly passion – like Orpheus - for God himself and the joy of serving him.

Either way, we can be confident with every temptation we face, that there is an accessible way through, by God's grace.
Posted by Peter Saunders at 14:14