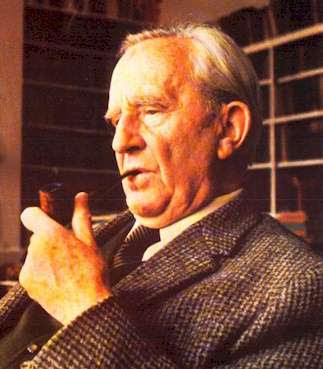 Lovers of ‘The Lord of Rings’ Trilogy, and now ‘the Hobbit’ will be interested to know that today, 3 January 2013, is JRR Tolkien’s twelfthty-first birthday.

He is of course best known as the author of the classic high fantasy works The Hobbit and The Lord of the Rings which have had a major resurgence in the light of Peter Jackson’s award winning films.

But as well as being an accomplished English writer and poet he was also a philologist and university professor: Rawlinson and Bosworth Professor of Anglo-Saxon at Pembroke College, Oxford, from 1925 to 1945 and Merton Professor of English Language and Literature at Merton College, Oxford from 1945 to 1959.

He was also a close friend of CS Lewis, fellow Oxford professor and author of the 'Chronicles of Narnia' (also now a film series) and many favourite books on Christian apologetics of which ‘Mere Christianity’, ‘Miracles’, ‘The Problem of Pain’ and ‘The Screwtape Letters’ are probably the best known.

Tolkien was a major factor in Lewis’ Christian conversion and they were both members of the informal literary discussion group known as the Inklings which met at the Eagle and Child Pub just over the road from St John’s College.

Tolkien was appointed CBE by Queen Elizabeth II on 28 March 1972. In 2008, The Times ranked him sixth on a list of ‘The 50 greatest British writers since 1945’ and Forbes ranked him the 5th top-earning dead celebrity in 2009.

After his death, Tolkien's son Christopher published a series of works based on his father's extensive notes and unpublished manuscripts, including The Silmarillion.

These, together with The Hobbit and The Lord of the Rings form a connected body of tales, poems, fictional histories, invented languages, and literary essays about a fantasy world called Arda, and Middle-earth within it.

Tolkien, throughout his life, was a devout Catholic, and behind all his books lies a Christian cosmology or worldview.

This is most evident in the Silmarillion, which has striking parallels with the biblical narrative and especially with the concept of an omnipotent, omnipresent God who created angels as well as men.

For those who wish to know more about the origins of balrogs, wizards, giant spiders, trolls, orcs and Sautron himself the Silmarillion is essential reading. The narrative is densely packed and one is left with the impression that had Tolkien been granted several more lifetimes he would have filled it out in much more detail as he has done with the familiar tales of Middle-earth.

‘There was Eru, the One, who in Arda is called Ilúvatar; and he made first the Ainur, the Holy Ones, that were the offspring of his thought, and they were with him before aught else was made. And he spoke to them, propounding to them themes of music; and they sang before him, and he was glad.’

As the narrative progresses we learn that these created Ainur, or angelic beings, included the more powerful Valar and the subordinate Maiar, who Tolkien describes as ‘other spirits whose being also began before the world’ who act as ‘servants and helpers’ to the Valar. Balrogs, Wizards (including Saruman and Gandalf) and Sauron himself are all Maiar.

This angelic hierarchy is reminiscent of the similar celestial strata we see in the Bible consisting of cherubim, seraphim, angels, archangels and others. And, as in the Bible, some Ainur (angelic beings) are good and some are bad.

In the Silmarillion, the lead ‘bad’ Vala (singular of Valar) is Melkor, who became Morgoth, and conscripted Sauron, the dark master of the Lord of the Rings Trilogy. Like the biblical Satan, or devil, he started out good, but fell on account of his pride and rebelled against Iluvatar (ie. God).

‘But as the theme progressed, it came into the heart of Melkor to interweave matters of his own imagining that were not in accord with the theme of Ilúvatar, for he sought therein to increase the power and glory of the part assigned to himself.’

Having fallen he then led others astray:

‘Then the discord of Melkor spread ever wider, and the melodies which had been heard before foundered in a sea of turbulent sound.’

In the same way Satan is described in the Bible as ‘the seal of perfection, full of wisdom and perfect in beauty’ who was ‘in Eden, the garden of God’ and ‘blameless’ but whose heart ‘became proud on account of (his) beauty’ and was thrown to earth (See Ezekiel 28 and Revelation 12).

However Eru’s plan, like that of the God of the Bible, was not to destroy him immediately or stop his evil but rather to turn it for good:

‘And thou, Melkor, shalt see that no theme may be played that hath not its uttermost source in me, nor can any alter the music in my despite. For he that attempteth this shall prove but mine instrument in the devising of things more wonderful, which he himself hath not imagined.’

So we see here Christian concept that evil is fallen good and that, despite evil, God uses it to bring about something even more beautiful than was first created.

Eru’s words to Melkor bring echoes of Joseph’s words to his brothers after they had betrayed him in Genesis 50:20:

‘You intended to harm me, but God intended it for good to accomplish what is now being done, the saving of many lives.’

And of course most importantly they foreshadow the life of Jesus Christ who, although crucified by the hands of sinful men, thereby provided, through his death and resurrection, the path by which sinful human beings can be reconciled with God himself.

So, if I have whetted your appetite you might be interested in reading the Silmarillion for yourself (£5.99 on Amazon), and perhaps even reading it alongside the Bible.