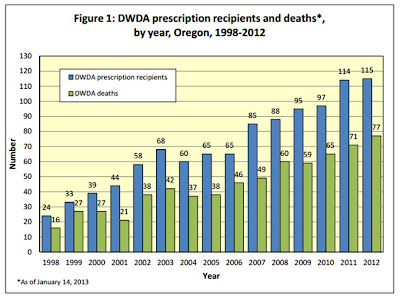 Lord Falconer has just announced that he is about to introduce a new bill into the House of Lords to legalise assisted suicide along the lines of the Oregon model – assisted suicide for mentally competent adults who have less than six months to live.

Members of the House of Lords should note that statistics released just last month (full report here) show that the number of assisted suicide prescriptions and deaths in Oregon, once again, increased in 2012 and has now reached an all-time high.

Falconer’s bill, however, only requires a twelve month life expectancy and so is thereby even more liberal than Oregon’s.

This pattern of incremental extension is similar to that seen in the Netherlands and Switzerland, other countries that have changed the law.

But as the numbers in Oregon have since doubled to 77 the UK equivalent would now be 1,300. With Falconer’s more liberal interpretation of what constitutes ‘terminally ill’ the numbers here would be expected to be higher still.

Currently assisted suicide is illegal here and we see only 15-20 Britons going to Dignitas in Switzerland to die each year.

And once legalised there will inevitably be incremental extension as we have seen in Oregon, Switzerland and the Netherlands. Legalisation leads to normalisation.

Currently only two US states, Oregon and Washington, have legalised assisted suicide, each on the basis of a referendum.

By contrast whenever a bill has been brought before a US state parliament it has been defeated. This has happened over 120 times in the last 20 years.

In Massachusetts, a left leaning Democrat state which rejected assisted suicide in a referendum last year, the opposition of doctors and disabled people has been very significant indeed.

This is because one of the most powerful arguments against it is public safety – any change in the law will put pressure on vulnerable people to end their lives and no law can be adequately safeguarded against abuse.

The lessons are clear. Let’s not go there.
Posted by Peter Saunders at 04:09