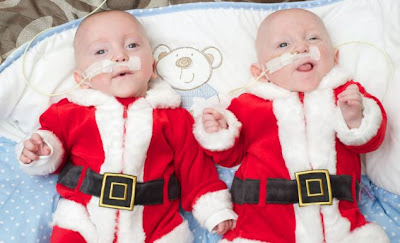 When twins Mackenzie and Cameron Glover were born 17 weeks prematurely on 17 June last year, they were so tiny that their mother said they could ‘fit inside a pint glass’.

Now, after a lengthy battle for life against the most astonishing odds, the boys, born at just 23 weeks and three days gestation, have become one of the most premature sets of twins ever to survive in the UK.

Their mother Pam says her miraculous boys fill her with wonder – but she is left angry and mystified that the law continues to permit the abortion of babies older than her sons were at birth.

Pam said: ‘For us now, the idea that it’s possible to abort a child up to 24 weeks – older than Cameron and Mackenzie were – just doesn’t bear thinking about.’

The story, reported in the Daily Mail this week, has reopened the debate about abortion time limits.

It comes just as Fiona Bruce MP launches a parliamentary inquiry into abortion for disability which will examine the law, professional guidance and information and support given to parents.

Disabled babies can be aborted right up until the time of birth and in 2011, according to Department of Health statistics, 146 were aborted after 24 weeks.

In all 2,307 abortions were carried out in 2011 under Abortion Act 1967 Ground E, for disability. This included more than 500 abortions for babies with Down’s Syndrome although the real number may well be twice as high.

Abortion industry leader Ann Furedi of BPAS has reacted strongly against the consultation saying that abortion should be a women’s choice.

However she has already come in for sharp criticism from Saving Downs, a charity advocating for children with Down’s syndrome, which has welcomed the inquiry saying that it is ‘exactly what the disability community needs: the removal of discriminatory laws against the disabled’.

Last year Health Minister Jeremy Hunt said that he personally favoured a lowering of the upper limit for aborting non-disabled babies to 12 weeks.

There are currently 16 countries in Europe which have upper limits of 10-12 weeks and that Britain has one of the highest upper limits and highest abortion rates in Europe.

Public and parliamentary opinion is changing on abortion for three main reasons – 4D ultrasounds, debates about fetal sentience and premature babies like the Olivers surviving below 24 weeks in neonatal units.

All this is increasing awareness about the ‘humanity of the pre-born baby’ and heightening concerns about abortion.

Ultimately societies will be judged by the way they treat the most vulnerable, and there is no one more vulnerable, more innocent and killed in greater numbers than a preborn baby.

Last year I was one of nine signatories to a letter to the Telegraph describing the practice of aborting babies for disability as a form of ‘eugenics’ and arguing that the present law is deeply hypocritical and discriminatory.

This consultation will be an opportunity for disabled people and their advocates to speak out against this practice and possibly bring some much needed reform.
Posted by Peter Saunders at 10:53