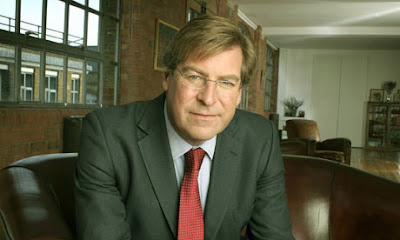 This morning I took part in a short documentary on the Radio Four Sunday programme on ‘change therapies’ for those with unwanted feelings of same sex attraction.

The presenter was Ed Stourton (pictured).

‘Change therapy’ (more accurately SOCEs - sexual orientation change efforts) is aimed at altering the strength and direction of sexual feelings and is currently banned in the UK by counselling organisations such as the BACP and UKCP. ‘Change therapists’, however, continue to practise under auspices of professional counselling bodies in the US and Canada.

The UK ban is primarily on the basis of the argument that sexual orientation is biologically caused and fixed, that change is therefore impossible and that therapy aimed at change is harmful (I have previously critiqued this view here, here and here).

The Sunday Programme item was prompted by a debate earlier in the week in the Houses of Parliament where Professor Michael King of the Royal College of Psychiatrists and Gay Rights Activist Peter Tatchell took on Consultant Psychiatrist Joseph Berger and therapist Mike Davidson (See my previous reviews of the arguments Tatchell and King presented).

The Sunday Programme piece was reported by Trevor Barnes and featured six interviewees – Mike Davidson, Di Hodgson, Pamela Gawler-Wright , myself and two clients who had experienced change therapy. It was commendably well-balanced.

The programme began by playing an interview of a man who had not found ‘change therapy’ helpful and ‘left very quickly’.

This was followed by the testimony of ‘Robert’, a 55 year-old man, now divorced, who had struggled for years with a promiscuous homosexual lifestyle. He explained how he had sought Christian therapy to help him to change:

I argued that with some groups of people, as with Robert, counselling and other forms of therapy can be successful :

‘The evidence shows that some people will experience a change in the strength or direction of their sexual feelings either spontaneously or with therapy from a skilled therapist. People who experience a dissonance between their feelings and their values or desires will sometimes seek professional help and if they can harmonise their lifestyle choices with their values then they do feel better.’

Di Hodgson, chair of the Diversity, Equalities and Social Responsibility Committee of the UK Council for Psychotherapy (UKCP), questioned the very principles underlying the therapy:

‘I think there is very conflicting evidence. But in some ways, to me, that’s really not the right question to ask, if I may say, because whether or not something works doesn’t mean that it is ethical or in the public interest or the right thing to do for someone. So we have taken a view in a way which is regardless of the scientific findings. We still believe that it is unethical to seek to agree or to work towards changing someone’s sexual orientation through psychotherapy.’

I thought this was quite an extraordinary admission by someone speaking on behalf of an organisation that seeks to de-register therapists who practise ‘change therapy’ on the pretext that it does not work.

A psychotherapist, Pamela Gawler-Wright, was then interviewed. She claimed that she had personally met many people who had been harmed by ‘change therapy’.

Mike Davidson, a therapist who has been suspended by the UKCP for practising ‘change therapy’, conceded that it is not for everyone but argued that clients should not be banned from seeking it:

‘Any therapy in the wrong hands is potentially damaging but therapy that overrides a person’s right to choose the pathway that suits them and is consistent with their own values is damaging. So I’m not arguing that everybody should change, or that everybody can change, but I think people need to have the right to explore the possibility if that is what they want.’

He went on to argue that much of the objection to ‘change therapy’ is not actually evidence-based but rather ideology-driven.

‘I think one of the reasons that there is such a reaction to this is that it is perceived to be a threat to the idea that homosexuality is innate and therefore unchangeable. Anything that comes along that demonstrates that actually the reverse is true, that in some cases it can be changed - and certainly homosexual feelings can be reduced and sometimes eliminated - is a threat to that ideological position.’

Pamela Gawler-Wright responded by outlining her concerns that ‘change therapists’ start from a belief that homosexuality is wrong, is caused by unhappiness, and causes unhappiness. She objected to what she saw as the underlying ideology and ethical framework.

I concluded by arguing for a more even-handed approach:

The programme, perhaps for the first time, gave an opportunity for those of us who support appropriate ‘change therapy’ to give our side of the argument. It also brought out clearly the point that objections to change therapy seem to be based much more on ideological grounds than on evidence.

I have previously on this site critiqued the arguments that have been used to discredit ‘change therapy’ (see links above) and would recommend to anyone wanting to know more detail about the evidence to read the booklet ‘Unwanted Same Sex Attraction’ which is available on the CMF website.

Some ‘change therapies’ are harmful and some ‘therapists’ are not properly trained but I cannot see why people seeking this kind of help should not in a free society have access to professional accredited therapists who are in sympathy with their values.

Change therapists are free to practise in the US and Canada under the auspices of their professional bodies but not in the UK. This seems to be primarily because those people who oppose ‘change therapy’, on seemingly ideological as much as evidence-based grounds, have managed to get into positions of power in the UK organisations that accredit therapists and put these bans in place (more on this here).

My hope is that this Radio Four documentary will be one small step towards that beginning to change.
Posted by Peter Saunders at 13:47