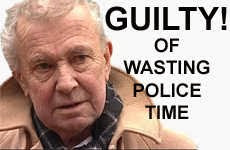 As reported by the BBC today, Journalist, broadcaster and gay rights activist Ray Gosling has died in hospital in Nottingham.

My sympathy is with Gosling’s family.

However his death revives memories of the time when the BBC’s flagrant promotion of assisted suicide and euthanasia arguably reached its greatest depths.

When the former television journalist confessed on BBC’s Inside Out programme on 15 February 2010 that he had taken a pillow and smothered a gay lover with AIDS who was in ‘terrible, terrible pain’ it very quickly became an international news story.

But it later transpired, after a police investigation involving 32 officers, lasting six months and taking 1,800 hours at a cost of over £45,000 in taxpayers money, that Goslings’ ‘confession’ was simply made up. He did not kill his lover and in fact was not even in the country at the time he died. Furthermore the man did not die in pain.

Gosling was given a 90-day suspended prison sentence at Nottingham Magistrates' Court after pleading guilty to wasting police time. The judge in passing sentence branded him as ‘a sheer liar and fantasist’ guilty of ‘creating and maintaining this cruel fabrication’.

It was very clear at the time the story broke that the BBC intended it to have maximum impact.

The Care Not Killing Alliance (CNK) started getting media calls hours before the programme was originally broadcast regarding a ‘new euthanasia story’ involving a ‘prominent BBC employee’ but we were not allowed to know any of the details. Meanwhile every regional and national BBC news outlet was lining up interviews for the ensuing 24 hours.

We later learnt that Gosling had made his original confession to BBC colleagues four months earlier over a ‘beery lunch’. And the programme itself was filmed some months before it was shown and eventually screened just one week before the Director of Public Prosecutions published his prosecution policy for cases of assisted suicide.

Why did the BBC not inform the police during this time or more carefully investigate what was effectively a confession of murder? How many BBC employees actually knew about it? Was this actually a cynical attempt to influence public and judicial opinion at a critical point in time?

These questions were never satisfactorily answered.

In the days that followed the screening, as well as giving a spate of national and regional broadcasts in the UK (including Five Live and BBC breakfast), I was interviewed by a host of international outlets covering the story – including Italian and Spanish newspaper journalists, Russian, Bolivian, Brazilian and Indian television and the BBC world service. The international interest was huge.

The very same week, both the Daily Mail and Daily Telegraph carried the story of Lord Carlile, CNK Chairman, writing to the BBC Director General to allege media bias and to accuse the corporation of adopting an ‘incredibly zealous’ ‘campaigning stance’ on assisted suicide.

The BBC has a long history of acting as a cheerleader for euthanasia and assisted suicide, but with the Gosling affair it plumbed its greatest depths.

The corporation cynically planned months ahead to release a story that was total untrue at a time and in a manner guaranteed to maximise its international impact and to influence public policy.

Not only did it fail in its duty to provide fair and impartial broadcasting. It also failed to report a criminal act to the police, opting instead for the sensational proliferation of partisan propaganda and, in this case, downright lies.

And it used our licence fees to do it.