What’s happening? A quick update on euthanasia and assisted suicide 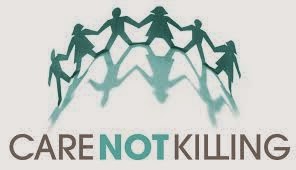 Excerpts from the latest newsletter from Care Not Killing Alliance.

Independent MSP Margo MacDonald launched her long awaited second attempt to legalise assisted suicide in Scotland, just three years after her last bill was defeated in Holyrood by a massive 85-16 in 2010. 87% of all who made written submissions to the scrutinising committee for that bill were opposed to it, and 64% of individuals and 62% of organisations responding to her own consultation ahead of the current bill also rejected a change in the law.

The MacDonald bill was immediately met by the British Medical Association restating their opposition to legalising assisted suicide, and with healthcare professionals and organisations around the world also restating their opposition to legal changes which would fundamentally alter the practice of medicine, we will watch closely as the Royal College of General Practitioners assesses responses to its consultation, which closed on 9 October.

Twenty four hours prior to the unveiling of the Scottish bill, the Euthanasia Prevention Coalition Europe was formally launched in the European Parliament. The coalition was first convened at the beginning of 2013, with representatives from the UK, France, the Netherlands, Belgium, Switzerland, Spain and Italy. Last week's programme included a press conference hosted by Finnish MEP Sari Essayah and a public debate at the Goethe Institute. Please visit the EPC Europe website, and follow the coalition on Twitter (@EPCEurope) and Facebook (/EPCEurope).

The Belgian legislature is pressing on with efforts to extend its euthanasia law to children as young as 12, statistics released in September showed a 13% rise in Dutch euthanasia and a bill in Quebec surges forward, but legislative efforts in other parts of the Europe are stalling or falling.

While Lord Falconer's bill - the principles of which were rejected by the House of Lords 148-100 in 2006 and 194-141 in 2009 - awaits second reading, the flaws in its foundation and drafting have become ever clearer. The Labour peer conceded in one interview that his bill effectively places doctors above the law, while two high level think tank reports have stated that the bill fails 'the public safety test' and is 'asking Parliament to sign a blank cheque'. Media consideration of the bill has also caused concerns, with Lord Falconer being given carte blanche to publicise his bill on the BBC's flagship breakfast TV show.

We welcomed the decision by all three judges in the Appeal Court comprehensively and completely to reject the Nicklinson and Lamb cases, but were concerned at the 2-1 decision in the 'Martin' case to seek further clarification of the DPP guidelines for so-called 'class two' cases relating to assisted suicide, requiring the involvement of a health professional. The DPP (Keir Starmer, who has since been succeeded by Alison Saunders) immediately announced that he would appeal to the Supreme Court, and leave to appeal was also granted to Paul Lamb and the Nicklinson family.


Following the report, published in July, of Lady Neuberger's review of the LCP - which concluded that the LCP should be phased out 'over the next 6 to 12 months' and replaced by an individual end of life care plan, 'backed up by good practice guidance specific to disease groups' - a Leadership Alliance for the Care of Dying People(LACDP) was set up under the chairmanship of Dr Bee Wee, National Clinical Director for End of Life Care at NHS England. The Leadership Alliance has begun a public consultation to inform its response to the review, which runs until 6 January 2014.
Posted by Peter Saunders at 13:26