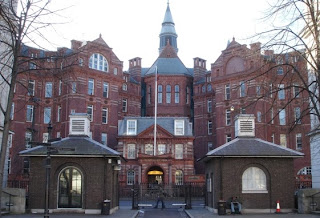 A debate at University College London on Monday night allowed the issue of assisted suicide to be addressed.

UCL’s Cruciform Building was the impressive setting for the motion, ‘This House would legalise Assisted Dying’, I was in the opposition team with Lord Carlile, Baroness Finlay and Robert Preston – leading lights in the think tank Living and Dying Well.

Speaking for the motion were Lord Falconer, Baroness Jay, Sir Terence English and Prof Raymond Tallis, all of Dignity in Dying (the former Voluntary Euthanasia Society) and its small medical wing.

We were given seven minutes each. Here is my talk which focused on the issue of the ‘slippery slope’. A full report of the debate is available on the CNK website.

The four main groups resisting the legalisation of assisted dying in this country – doctors, disabled people, faith groups and parliamentarians – do so primarily because they are anxious about the consequences of licensing of doctors to dispense lethal drugs.

Their concerns are both about how such a system could be regulated and also about the pressure legalization would place on vulnerable people to end their lives for fear of being a financial or emotional burden on others.

This is heightened by the evidence of incremental extension or mission creep in other jurisdictions.

In the Netherlands which legalised assisted suicide and euthanasia in 2002 there has been an increase of 10 to 20% of euthanasia cases per year since 2006 from 1,923 to 4,188. The 2012 figures included 42 with early dementia and 13 with psychiatric conditions.

In addition in 2001 about 5.6% of all deaths in the Netherlands were related to deep-continuous sedation. This rose to 8.2% in 2005 and 12.3% in 2010. A significant proportion of these deaths involve doctors deeply sedating patients and then withholding fluids with the explicit intention that they will die.

Children as young as twelve can already have euthanasia and a 2005 paper in the New England Medical Journal reported on 22 babies with spina bifida and/or hydrocephalus who were killed by lethal injection in the Netherlands over a seven year period. It estimated that there actually 15 to 20 newborns being killed in this way per year - despite this still being illegal. The culture and public conscience have changed.

In Belgium, which legalised euthanasia in 2002, there has been a 500% increase in euthanasia deaths over ten years between 2003 and 2012. High profile cases include Mark and Eddy Verbessem, the 45-year-old deaf identical twins, who were euthanised by the Belgian state, after their eyesight began to fail; then there is Nathan/Nancy Verhelst, whose life was ended in front of TV cameras, after a series of botched sex-change operations. His mother said she hated girls, found her child 'so ugly' at birth and did not mourn his death. And then there is Ann G, who had anorexia and who opted to have her life ended after being sexually abused by the psychiatrist who was supposed to be treating her for the life-threatening condition.

Organ donation euthanasia is already practised in Belgium and the Belgian Senate is tomorrow discussing plans to extend the programme to minors and people with dementia (they have since recommended this). Already in parts of Belgium one in three cases of euthanasia is involuntary and half go unreported. And there has been not one prosecution for abuses in the last ten years – perhaps because the one of the lead euthanasia practitioners – Distelmans – chairs the very committee that is meant to regulate his activity.

Switzerland, where assisted suicide is legal, first released assisted suicide statistics in 2009, laying bare a 700% rise in cases (from 43 to 297) from 1998 to 2009. Amongst those travelling from abroad to end their lives at the notorious Dignitas facility have been many people who could not by any stretch be described as terminally ill – and included cases of people who could have lived for decades ending their lives -  with arthritis, blindness, spinal injury, diabetes, mental illness -  or people who were essentially well but could not bear to live without their spouses.

Dignitas has attracted much criticism in recent years over accounts of discarded cremation urns dumped in Lake Zurich, reports of body bags in residential lifts, suicides being carried out in car parks, the selling of the personal effects of deceased victims and profiteering with fees approaching £8,000 per death.

In the US state of Oregon there has been a 350% increase assisted in suicide deaths since legalisation. I’ll leave it to my colleagues to expand on the details but notable are two people with cancer – Randy Stroup and Barbara Wagner – who were told that the Oregon Health Authority would not pay for their chemotherapy but would happily pay for their assisted suicide – which was of course much cheaper. Is this really the kind of temptation that we wish to put before NHS managers in Britain? Is it any wonder that over 120 attempts to change the law through US state parliaments have failed?

The problem is that any law allowing assisted suicide or euthanasia will carry within it the seeds of its own extension.

And whilst Lord Falconer may claim to have limited objectives - on his coat tails are a host of other UK groups with more radical agendas – FATE, SOARS, the BHA, NSS and EXIT International.

They are able to use exactly the same arguments because Lord Falconer’s position is at heart both illogical and discriminatory.

Or as Exit international asks – why not the elderly bereaved and the troubled teen?

There will inevitably be pressure to extend the boundaries which may well not survive legal challenge once the so-called ‘right’ is available for some.

And that it is the other problem –changing the law would give doctors a degree of power over life and death that some will inevitably abuse.

It will be doctors who see the patients, fill out the forms, dispense the lethal drugs. Some of them will push the boundaries. Some will falsify certification. There may be some who, like Harold Shipman, will develop a taste for killing and they will be very difficult to detect.

But many will simply be too busy, too pressured and facing too many demands to make the kind of cool comprehensive objective assessments that this kind of law requires. And very few of them will really know the patients or their families.

We have seen this already with abortion. We began with a very strict law which allowed it only in limited circumstances. Now there are 200,000 cases a year. Most of them fall outside the boundaries of the law. There is illegal pre-signing of forms, abortions for sex selection, abortions on demand for spurious mental health reasons. And only one conviction for illegal abortion in 45 years.

Society is reluctant to touch and question doctors. The police are reluctant to investigate. The DPP hesitates to prosecute. The courts are unwilling to convict. Parliament turns a blind eye. It is simply not safe to give doctors this sort of power because some will abuse it as they have in other countries and it will be very difficult to stop them.

It’s far better not to go there at all.

The best system available is that which we have currently – a law carrying a blanket prohibition on both assisted suicide and euthanasia but with discretion given to both prosecutors and judges to temper justice with mercy in hard cases – the current law has both a stern face and a kind heart.

And it works – there are very few cases observed (just 15-20 per year make the trip to Switzerland) but also very few prosecutions.

Let’s keep it that way.