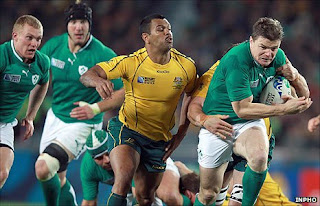 Ireland 15 Australia 6! What a turn up for the books! But the Ireland tight five out-muscled the Australians up front, starving them of ball so that their superior backline could not make any impact.

Both sides missed a number of kicks in a try-less Group C match fought at Auckland’s Eden Park but Ireland were worthy winners. And if Quade Cooper’s Spencer-esque pass to the opposition on full attack had resulted in a full-length of the field try to Tommy Bowe in the closing minutes (O’Connor cut him down at the corner flag) the margin could have been even more embarrassing.

The result means that we are heading towards a North-South knock-out quarter-final with Australia, New Zealand, South Africa and Argentina on one side of the draw and France, England, Wales and Ireland on the other.

On current form Scotland look unlikely to trouble Argentina or England, and given that England have already beaten the South Americans they are now set to top Group B. If as expected New Zealand beat France and South Africa and Wales win their remaining games against the minnows (a virtual certainty) then we are looking at NZ v ARG and RSA v AUS on one side of the draw and IRE v WAL and ENG v FRA on the other side.

Of these four you might reasonably conclude that New Zealand will beat Argentina (Argentina have never beaten the All Blacks who have home advantage) but the other three games are far too close to call.

And if Scotland are as woeful as they have looked so far (and therefore far behind the other six nations teams) and the IRE/AUS and RSA/WAL cliffhangers are an accurate indication of current form of the various sides then the gap between the Northern and Southern Hemispheres may be very small indeed.

If there are no more major upsets then New Zealand should meet either South Africa or Australia in one semifinal but who will contest the other?

New Zealand is going to have to play very well if they are to repeat their 1987 home victory. Please boys don’t choke again.
Posted by Peter Saunders at 09:17