Arise Sir Richie! We salute you. 100 tests down and still going. 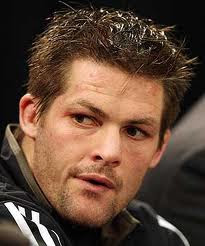 As Kiwis we all watched last night’s world cup rugby showdown between New Zealand and France in fear and trembling in view of the painful memories of the disastrous losses of 1999 and 2007.

But it was a consummate display by the All Blacks who ran in five tries to two to turn out 37-17 winners and secure their place in the Southern Hemisphere side of the draw to play a quarter final against Scotland or Argentina.

Barring a major upset France now look likely to meet England on the North side of the draw.

There are still areas of the game to work on. We won the second half only by 18-14 due to a French intercept and later a second opportunistic try following a quickly taken penalty, along with some misdirected passes and lost attacking opportunities on our part, but the overall margin was comfortable.

But for me the real emotion was in seeing Richie McCaw, All Black captain, secure his 100th cap – the first All Black to do so.

After a tough year beginning with the Christchurch earthquake, which the Crusaders team endured like all other residents, McCaw almost led his provincial team to victory in the Super Fifteen final, until glory was snatched by some Genia genius. Glory in Queensland was not to be and sometimes winning is not everything.

But we all want to see Richie raise the Webb-Ellis cup on 24 October.

The signs spectators held at last night's game said it all. There was ‘Richie McCaw. Marry me. I’m French’ and of course ‘Arise Sir Richie’.

Speaking ahead of the first of a regular series of media briefings on preparations for the World Cup, Key said the ‘dream scenario’ would be a New Zealand versus Australia final – ‘with a substantial All Black victory’. 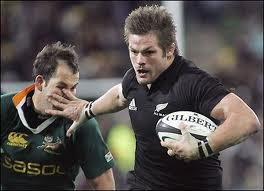 He added there was ‘massive pressure’ on McCaw and his team, because New Zealanders want their team to win so desperately. Asked if there was an honour in it for McCaw if the All Blacks won, Key said he hoped so. ‘Can't think of anything more joyous than Sir Richard McCaw,’ he said.

Well an Australia v New Zealand final is not going to happen. Ireland has made sure of that and has in the process virtually guaranteed a North South final. And an All Black victory might not happen either, although we will be rooting for them all the way.

But regardless, today is the day to take off our hats to Richie McCaw and salute his individual brilliance and excellence in leadership.

McCaw’s brief speech at the end of tonight’s match was typically understated. The great captain first expressed his satisfaction about donning his 100th cap at Eden Park against the French in a world cup and beating them – it doesn’t come better than that. He then modestly gave credit to his team, personal supporters and the great New Zealand public and almost, it seemed, shed a tear as the plaudits rained down and the roar of the crowd reached a crescendo.

I leave the final words to a tribute to McCaw written just before the match (fittingly) on ‘Roar’ and will leave you to read the full article, ‘Arise, Sir Richie McCaw-100 Test matches’, on their website.

On Saturday night, at Eden Park, we’ll see something quite extraordinary.

Every person at the ground, every person around New Zealand watching on TVs in pubs and clubs and at home, and every rugby mad Kiwi around the world, will stand as one and acknowledge something very, very special.

For the first time in the history of the great game in New Zealand, we will finally see an All Black attaining the almost unheard of target of 100 Test matches.

31-year-old Richard Hugh McCaw will lead out the All Blacks in the Pool A decider against France and earn himself legendary status above and beyond all those before him. 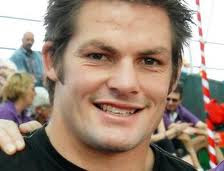 Playing at open side flanker, he has continually put his body on the line in a position of absolute physical presence. His ability at the breakdown is still second to none and his willingness to ‘take one for the team’ has earned him the respect of his fellow teammates and the ire of opponents.

McCaw is continually targeted for the threat he is, and subsequently ends up on the receiving end of late tackles and more off the ball ‘gamesmanship’ than what others may endure.

Since his debut against Ireland in 2001, McCaw has been our first choice No. 7, and has been regarded as the best in his position for most of those years. Winning the IRB Player of the Year Award a record three times is proof of that.

100 Test matches – legendary stuff. If playing 100 Test matches and becoming the first All Black to do so, while also being the most capped All Black captain in history, isn’t enough to knight Richie McCaw, then winning a World Cup would guarantee it.

Arise, Sir Richie. We salute you.
Posted by Peter Saunders at 04:54