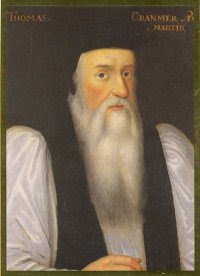 Godwin's law is the observation made by Mike Godwin in 1990 that, ‘As an online discussion grows longer, the probability of a comparison involving Nazis or Hitler approaches 1 (100%).’

In the same vein, Cranmer’s law, coined this week states: ‘No matter how decent, intelligent or thoughtful the reasoning of a conservative may be, as an argument with a liberal is advanced, the probability of being accused of “bigotry”, “hatred” or “intolerance” approaches 1 (100%).’

In an astute analysis on his blog Archbishop Cranmer argues:

‘In fulfilment of the Orwellian prophecy, the prevailing political narrative has given rise to deviant definitions. “Bigotry” has ceased to mean the obstinate and blind, often nasty and hypocritical, attachment to a particular creed. “Hatred” has ceased to mean intense dislike or loathing. “Phobic” has ceased to mean morbid fear or aversion. Each of these terms is now routinely applied to those who simply possess a contrary view or articulate an opposing opinion to the ubiquitous liberal-left worldview and social orthodoxy, and especially to those whose observations are irrefutable and arguments unanswerable.’

As Cranmer implies, people use such labels as an excuse for not engaging in debates they might lose. But they also use them to intimidate and silence potential opponents or to gain support from anyone who wishes to dissociate themselves from those attracting the labels.

No one likes being called ‘homophobic’, ‘islamophobic’ or ‘bigoted’ which is why many Christians choose to remain silent rather that to express views which run counter to the prevailing secular orthodoxy.

This fear of being labelled leads some to avoid ever saying publicly, for instance, that sex outside marriage is wrong, that Jesus Christ is the only way to God or that we should not kill babies in the womb.

But it is precisely in these areas where Christian truth is most under attack that we need to be faithful to Christ’s teaching regardless of what people might choose to call us.

Jesus said, ‘If anyone is ashamed of me and my words in this adulterous and sinful generation, the Son of Man will be ashamed of him when he comes in his Father's glory with the holy angels.’ (Mark 8:38)

He also said ‘Blessed are you when people insult you, persecute you and falsely say all kinds of evil against you because of me. Rejoice and be glad, because great is your reward in heaven, for in the same way they persecuted the prophets who were before you.’ (Matthew 5:11,12)

As the disciples prayed for boldness to speak unpalatable truth, so must we - even if they call us bigoted, phobic or something worse for doing so.
Posted by Peter Saunders at 15:58