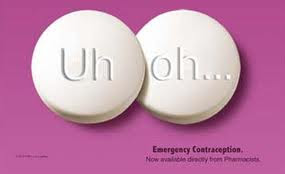 According to the Daily Telegraph a poster for the scheme, featuring the word ‘sex’ in fairy lights, asks: ‘Getting “turned on” this Christmas?’ And a dedicated website for the service is titled, rather bawdily, santacomes.org.

Women wanting to obtain the morning after pill, Levonelle One Step, will have to register their details on the website. They will then be phoned by a nurse for a 15-minute consultation intended to weed out young teenagers and assess suitability before being posted the pills.

However, BPAS has admitted that under-age girls will almost certainly obtain pills through the scheme by lying to them. Some children ‘will not be completely honest about their age’, a spokesman said. Under-16s would usually need a prescription to prevent a possible pregnancy in this way.

Andrew Lansley, the Health Secretary, said last night that he would prefer the pills to be issued after a face-to-face consultation but stopped short of saying he would intervene.

Not suprisingly critics have reacted sharply.

Michaela Aston, spokesman for the pro-life charity, Life, said the new service made getting the pills as easy as ordering a pizza. She said: ‘There are absolutely no guarantees that under-age girls won’t be given this pill, as there are no checks on their age carried out by BPAS.’

Norman Wells, director of the Family Education Trust, said: ‘When the morning after pill was first approved for use in the UK, assurances were given that it would be used only in exceptional circumstances and would remain a prescription-only drug under the control of doctors. Not only is it now being marketed as a “just-in-case” drug and supplied free of charge, but BPAS’s telephone service will inevitably lead to underage girls lying about their age in order to access it.’

Josephine Quintavalle, founder of the Pro-life Alliance, said: ‘BPAS won’t have any idea about what is really going on with the caller. She could be having underage sex. She could sell it to a friend.’

The risk of underage girls accessing the morning after pill is of course a key objection to the scheme.

But there is a more fundamental reason why this scheme is dangerous: Morning-after pills don’t actually cut teen pregnancy rates and actually increase the incidence of sexually transmitted infections.

Research findings demonstrating this earlier this year (published in the Journal of Health Economics (full text) just last December and reported in the Daily Telegraph in January) were the final nails in the coffin of the Labour government’s teenage pregnancy strategy, dreamt up by the now defunct Teenage Pregnancy Independent Advisory Group (TPIAG) which was set up in 2000 to advise the government on how to cut teenage pregnancy.

The research, by professors Sourafel Girma and David Paton of Nottingham University, compared areas of England where the scheme was introduced with others that declined to provide the morning-after pill free from chemists.

International research has consistently failed to find any evidence that emergency birth control schemes achieve a reduction in teenage conception and abortion rates. But now we have evidence showing that not only are such schemes failing to do any good, but they may in fact be doing harm.

They are the very last thing we need to foist on vulnerable drunken teenagers during the festive season and will simply encourage them to take more risks by giving them a false sense of security.

This latest BPAS strategy is underpinned by the dangerous assumption that there is no right or wrong in teenage sexual activity - just choice. This assumption has led to a values-free framework in which the rate of unplanned pregnancies and sexually transmitted disease amongst teenagers is the highest in Europe.

Its prime effect, apart from further inflating BPAS’s already inflated coffers with more taxpayers money, will be to lead to more reckless behaviour, more sexually transmitted disease and no decrease in unplanned pregnancy and abortion.

The best way to counter the epidemic of unplanned pregnancy and sexually transmitted disease is to promote real behaviour change through such programmes as Love for Life (Northern Ireland), Love2last (Sheffield), Challenge Team, Romance Academy or Lovewise (Newcastle). These are just the sorts of initiative that the government should be encouraging and their message of abstinence and caution is the one they should be giving.

This latest BPAS move is sadly yet another unfortunate, ill-conceived opportunistic knee-jerk response to Britain’s spiraling epidemic of unplanned pregnancy, abortion and sexually transmitted disease amongst teenagers and will only make matters worse. It is most unfortunate that the government is actually funding it through them.

Instead of pursuing these tired flawed ‘ambulance at the bottom of the cliff’ policies we should be focusing on evidence-based strategies aimed at bringing about real behaviour change.
Posted by Peter Saunders at 04:55