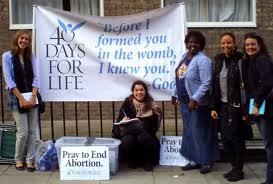 Britain’s abortion industry is under pressure and industry leader BPAS (British Pregnancy Advisory Service) has been particularly under the spotlight recently, and not just for their aggressive marketing tactics aimed at increasing their ‘market share’ of the shrinking health budget.

First there was pro-abortion MP Diane Abbott’s high profile resignation from a government committee on abortion counselling after she was unable to shape proceedings to her liking.

Then there was the revelation that 98% of abortions in Britain are technically illegal as a consequence of the RC Psych enquiry finding that continuing with an unplanned pregnancy does not constitute a greater risk to the mental health of pregnant women than abortion.

Next was the Daily Telegraph’s undercover investigation into abortions for sex selection carried out at some of the country’s best known ‘clinics’. BPAS itself just escaped a police enquiry when a centre manager was able to stop an abortion that was in the process of being authorised.

And more recently BPAS revealed that was interpreting the Abortion Act in a very liberal way by conflating ‘distress’ with ‘mental ill-health’.

The latest episode in this evolving drama has seen BPAS complaining about peaceful pickets outside their abortion facility in London’s Bedford Square. Today they are calling through their press office (aka the Guardian newspaper) on the support of the Department of Health in dealing with a ‘new era of anti-abortion protests'.

Apparently a group of people from the pro-life organisation ’40 Days for Life’ (more background from Caroline Farrow) has been holding vigils outside its front door.

BPAS alleges that the group is placing pressure on its ‘clients’ and photographing them arriving at and leaving.

However, ’40 Days for Life’ dispute these claims and say that the camera is used only to record when they themselves are being harassed by centre staff.

‘40 Days for Life conducts a peaceful, prayerful and legal vigil in London. The central point of our vigil is to pray for an end to abortion and show that that is a love in community that can help a woman to choose life for her unborn child.

Since our campaign started in September 2010, we estimate that more than 30 women have chosen life for their unborn children as a result of our campaign through prayer and also through an offer of love, help and support during a difficult time.’

‘We have a statement of peace that sets the tone and ethos of our prayer vigil as a peaceful and prayerful event. Since our campaign started, we have received a very large number of insults and threats. At times, members of the vigil have filmed themselves in order to protect themselves from these threats. We do not encourage anybody to film members of the public during our campaign.

There have been over seven million abortions in Britain since the Abortion Act 1967 was passed, now over 200,000 every year. Every abortion stops a human heart and ends a human life. And as I have argued before there is no one more innocent, more vulnerable and killed in greater numbers than the unborn child.

But abortion also damages women, and many women choose it simply because they feel they have no alternative or because they are being put under pressure by partners, friends or family members.

We know that when given information and support many will change their minds.

Some years ago I spoke to a young woman in just this situation who was on the conveyor belt to abortion but changed her mind after I sent her a letter offering support. She later thanked me for helping her avoid ‘making the worst decision of (her) life’ and two years later a card with a picture of the two year old boy who was the joy of her life. I have never forgotten it.

40 Days for Life have already saved over 5,000 lives from destruction worldwide and protected a similar number of women from a lifetime of guilt and regret.

It’s not surprising that they are getting some stick from the abortion industry for it, but I commend their courage, persistence and willingness to face opposition and criticism in order to do something of eternal value.

I’m reminded of legendary cricketer CT Studd who left a promising career to do missionary work in China in perilous times and said:

‘Some wish to live within the sound of Church or Chapel bell; I want to run a Rescue Shop within a yard of hell.’

Rescue those who are being taken away to death;
hold back those who are stumbling to the slaughter.
If you say, ‘Behold, we did not know this,’
does not he who weighs the heart perceive it?
Does not he who keeps watch over your soul know it,
and will he not repay man according to his work? (Proverbs 24:11,12)
Posted by Peter Saunders at 10:57