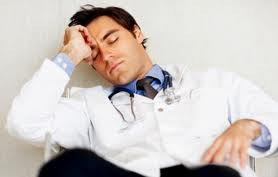 As a general surgical registrar I was once helping my consultant remove a giant spleen when the patient began 'hosing' from an invisible source. After a frenzy of clamping, cutting and ligating, things stabilised and we were able to proceed at a more leisurely pace. 'It's good to see the boss sweat, isn't it?' he said, and I had to agree.

Seeing someone we admire really struggling can actually be a great encouragement, especially if the struggle has occurred because of their willingness to accept a difficult challenge. In my consultant's case it would have been far easier to avoid the giant spleen altogether, but his readiness to take it on – and sweat in the process – meant both a life saved and a trainee inspired.

As Christian doctors, most of us struggle to juggle the many demands of work, church and family successfully. Sometimes this is because we say 'yes' to extra responsibility when we should really have said 'no'. But often the struggle comes simply because we have responded in good conscience to do the right thing: choosing not to compromise, going the extra mile, being willing to help someone shoulder a burden, rising to the challenge.

The great biblical heroes of faith are inspiring because they teach us that God uses ordinary men and women who struggle in the same way that we do. Moses led his people out of slavery, performed miracles, talked face to face with God [1] and was the humblest man on earth.[2] And yet he once felt so desperately overwhelmed by the responsibility of looking after his people that he felt God was punishing him and asked to be put to death. God's response was to appoint 70 men to help him 'carry the burden of the people' so that he would 'not have to carry it alone'.[3]

Elijah felt so fearful after his heroics on Mt Carmel that he 'ran for his life' and 'prayed that he might die'. God's prescription was food, drink, a good night's sleep and a fresh filling of the Holy Spirit. God then assured him that he wasn't alone and led him to anoint a successor who would never leave his side.[4]

Esther was afraid that standing up for her threatened countrymen might lead to her own death, but she was persuaded that despite the risk, she should do the right thing and asked for her fellow Jews to fast and pray for her.[5] And God came through with the goods.

The Apostle Paul was the greatest church planter the world has ever seen, but he talked of himself, and Timothy, being 'under great pressure, far beyond our ability to endure, so that we despaired even of life'. [6] Through it he was able to know God's comfort in these trials, pass that comfort on to others [7] and learn that God's 'power is made perfect in weakness' [8].

Perhaps most striking are the words of the Servant of Isaiah, Christ himself, who could say 'I have laboured to no purpose; I have spent my strength in vain and for nothing' but then went on to declare that 'what is due to me is in the Lord's hand, and my reward is with my God' [9].

Are you feeling weighed down by bulging in-trays and looming deadlines, anxious that some of the many plates you are spinning will crash to the ground, worn down by the demands of managers or colleagues or just wondering how you are going to get through the next day? Be encouraged by the fact that even these greatest of saints at times were overcome with anxiety, fell exhausted, looked back and wondered if they had achieved anything of value, and even begged God to end their lives. And look to God as they did for the reinforcements, prayer supporters, courage, rest, fresh strength and words of hope to help sustain you. Most of all know that the God who calls you to walk in his footsteps has himself walked this earth, knows what it is like to be tempted [10] and lives in you by his Spirit. [11]

And we, who with unveiled faces all reflect the Lord's glory, are being transformed into his likeness with ever-increasing glory, which comes from the Lord, who is the Spirit. (2 Corinthians 3:18)