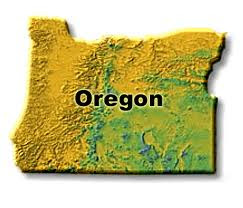 I was doing an interview on BBC Radio Wales this am on the Ottaway debate when a spokesman for Dignity in Dying (formerly the Voluntary Euthanasia Society) was again singing the praises of the law allowing assisted suicide in the US state of Oregon. The ‘Death with Dignity Act’ was passed there in 1997.

Back in 2006 the House of Lords calculated that with an Oregon-type law we would have about 650 cases of assisted suicide a year in Britain, whereas as currently we see only 15-20 going to Dignitas in Switzerland to die currently. But given the increase of numbers in Oregon the UK equivalent would now be well over 1,000.

Life Site News has just published a piece by Jonathan Imbody, which draws attention to the recent critique of the Public Health Department of the Oregon Health Authority’s report for physician-assisted suicides for the 2011 year by the Physicians for Compassionate Care Education.

They note the following:

•There were more prescriptions and deaths than in any previous year; the number of prescriptions written for lethal doses of barbiturates increased from 97 in 2010 to 114 in 2011, and the reported deaths from assisted suicide increased from 65 to 71. This is indicative of an increase in hopelessness and despair among a vulnerable population with serious illness. 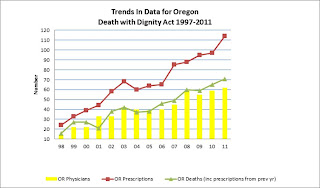 •As has occurred in prior years, not all who attempt to take the drugs will die. Two patients ingested the medication but failed to die. Each regained consciousness and died more than a day later, 30 hours and 38 hours respectively, of their underlying illness; they were not considered to have died from the ingested drugs. These are not easy drugs to take, they are bitter and foul-tasting, and vomiting does occur despite anti-emetics.

•As in previous years, there was virtually no formal evaluation for underlying depression, anxiety or other serious mental health issue. Only one of the 71 patients was referred for psychiatric evaluation. OHSU researchers in 2008 reported that 25% of patients requesting assisted suicide were considered to be depressed.

•As in previous years, pain has not been a major concern; only one third of patients had inadequate pain control or concern about it. The most commonly expressed concerns of those dying from physician-assisted suicide were unchanged from previous reports: less able to engage in activities making life enjoyable, losing autonomy, and loss of dignity.

•In only six cases was the prescribing physician present at the time of ingestion, in 3 other cases another provider was present. Thus, very little is known or reported regarding events at the time of ingestion of the medications. For 62 patients there was either no provider present or the information regarding presence of a provider was unknown. Physicians appear to be disengaged with patients at the end.

•In essence then, complications were unknown for 59 patients, and any information regarding minutes between ingestion and unconsciousness and death was unknown for 63 patients.

•The shroud of secrecy surrounding assisted suicide is heavier than ever. With each passing year, Oregonians know less and less about what is really happening with assisted suicides in the state.

Ironic then that DID and Margo Macdonald MSP continue to pursue a law change based on the Oregon model.

Let’s learn from Oregon and not go in that direction.
Posted by Peter Saunders at 04:31