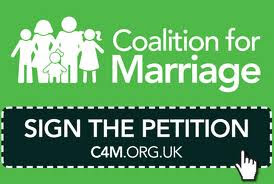 The Coalition for Marriage, (C4M) has issued a statement following publication by Lynne Featherstone of Government plans to redefine marriage (PA summary here).

Colin Hart, C4M Campaign Director, said: “The Government has today launched a consultation on redefining marriage. After initially relenting and promising to include a question on the principle of introducing same sex marriage it is clear from the written statement given to both Houses of Parliament by the Equalities Minister that she will simply ignore any answers to this question.

“This consultation is a sham. It is being pushed through despite the public never having a say on this change. None of the main political parties proposed redefining marriage in their manifestos and the impact assessment misses out many of the possible problems that could occur if this institution is redefined, for example how this change will affect our schools.

“The institution of marriage is the not the play thing of the state, it belongs to society and therefore cannot be redefined by a few politicians obsessed with appearing ‘trendy’ and ‘progressive’.

“It is also bizarre that Lynne Featherstone says that she wants to end the current two tier system’, yet wants to replace this with an even more complicated system that has two options for gays, and only one for heterosexuals. That’s equality for you.

“C4M and the 200,000 people who have signed our petition believe that this change is profoundly undemocratic, will have massive consequences for society and is simply unnecessary as civil partnerships provide all the legal rights of marriage.”

C4M is a grassroots campaign representing faith groups, MPs, peers, academics, lawyers, pro-family organisations and members of the public. The petition was launched at 9am on Monday 20th February and says: “I support the legal definition of marriage which is the voluntary union for life of one man and one woman to the exclusion of all others. I oppose any attempt to redefine it.”
Posted by Peter Saunders at 07:54