A dramatic representation of the maldistribution of global income 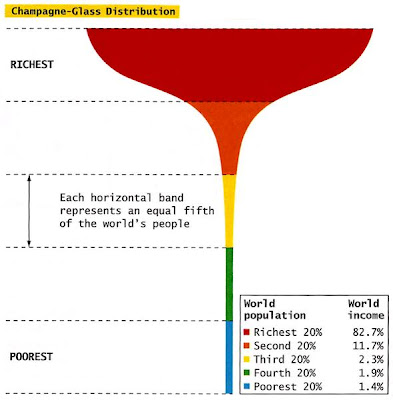 We all know that a huge gap exists between the rich and the poor worldwide, but this image, showing a champagne glass distribution of wealth, expresses that difference very forcefully.

The illustration was used by the British Medical Journal in April 1999 but there is an earlier version with similar numbers in the UNDP 1992 ‘Human Development Report’.

A UNICEF 2011 Social and Economic Policy Working Paper titled ‘Global Inequality: Beyond the bottom billion – A rapid review of income distribution ion 141 countries’ reveals that these figures have not changed appreciably over the last 20 years.

The report comments in its executive summary:

'While there is evidence of progress, it is too slow; we estimate that it would take more than 800 years for the bottom billion to achieve ten percent of global income under the current rate of change. Also disturbing is the prevalence of children and youth among the poorest income quintiles, as approximately 50 percent are below the $2/day international poverty line.'

When we look at more detail the statistics are even more shocking:

* These statistics account for one third of all human deaths. More people die as a result of extreme poverty than of any other cause.

* Extreme poverty is increasingly concentrated in fragile states and territories, defined as those with very weak institutions and poor policies.

* 8 million people die from lack of food and nutrition every year - about 24,000 deaths each day.

* For the first time in history, over 1.02 billion people do not have enough to eat. That’s one sixth of humanity - more than the population of the United States, Canada and the European Union combined.

Every year 18 million deaths, one third of the total 57 million are poverty related. That’s more than the world’s recognised top two killers combined - 7.3 million people died of ischaemic heart disease, 6.2 million from stroke or another form of cerebrovascular disease.

The Bible makes clear God’s concern for the poor and our responsibility. It is a message that the Western church still needs to take to heart as Richard Stearns has so eloquently argued.

It also makes clear God’s own pattern. Christ emptied himself in love in order to meet the needs of others and calls us to do the same.

This is how we know what love is: Jesus Christ laid down his life for us. And we ought to lay down our lives for our brothers and sisters. If anyone has material possessions and sees a brother or sister in need but has no pity on them, how can the love of God be in that person? Dear children, let us not love with words or speech but with actions and in truth. (1 John 3:16-18)
Posted by Peter Saunders at 14:27