The real meaning of the tarot – ‘the Wheel of Fortune’ 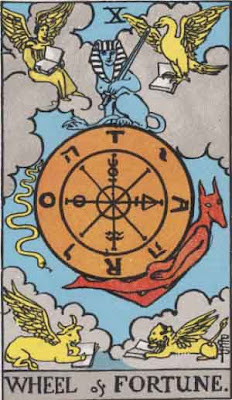 It has been vastly influential in the development of later divinatory tarot decks to the extent that many are called 'Rider-Waite clones' because they closely follow its symbolism and imagery.

The cards were originally published in December 1909 by the publisher William Rider & Son of London.

While the images are deceptively simple, almost childlike, the details and backgrounds hold a wealth of symbolism.

It is far better to seek to understand their symbolism and the ancient wisdom that lies behind it.

Now you may be familiar with tarot cards or you may not. But take a careful look at the ‘Wheel of Fortune’ above.

The most prominent feature of this card is the central wheel from which tarot cards get their name. If you follow the letters clockwise from the top and include the top letter ‘t’ twice you get TAROT.

But you can also read it from the bottom. The four letters then spell ROTA meaning wheel.

But even more important are the symbols between these letters (pictured left). These also are four letters but not in Latin script.

These letters are the key to the tarot’s true meaning.

They are actually four ancient Hebrew letters known as the ‘tetragrammaton’ – the Latin transliteration is YHWH – the ‘theonym’ or secret name of God – translated alternatively Yahweh or Jehovah (read them clockwise from bottom right).

That this refers to the God of the Old Testament of the Bible is further confirmed by the four winged creatures in each corner of the card.

These are a man, an eagle, a lion and a bull – the four features of the four living creatures which support the throne of God in the first chapter of Ezekiel.

The fifth creature atop the wheel is a lion – symbolising Judah, the fourth tribe of ancient Israel. We are told of Judah that ‘like a lion he crouches and lies down’(Genesis 49:9).

The next verse in Genesis (49:10) tells us that from Judah will come a descendant who will eventually rule over all the nations.

The Lion of Judah is Jesus Christ. Jesus was from the tribe of Judah and he is mentioned as the ‘Lion of Judah’ in Revelation 5:5.

The two-edged sword he holds is the word of God (Hebrews 4:12), the Bible, which all four of the creatures are reading.

The clouds surrounding the central image are a reference to the fact that Christ would come ‘with the clouds’ into the presence of God. Daniel 7:13 tells us that ‘he was given ‘authority, glory and sovereign power; all peoples, nations and men of every language worshipped him’.

The next verse (7:14) tells us that ‘his dominion is an everlasting dominion that will not pass away, and his kingdom is one that will never be destroyed’.

I’m sure you will also have noticed two other creatures in the picture. The red creature with two horns sliding under the wheel is the devil, the deceiver who tries to lead people astray and stop them from believing the truth.

He is the usurper who will attempt to wrest authority from the Lion of Judah. He makes his appearance first in human history as a serpent in the Garden of Eden – the yellow snake in the picture – who attempts to deceive human beings and get them to worship him rather than the true God. He will also one day appear as a man.

This is the real meaning of the tarot. It is revealing important truths about the world in which we live to all who are open to them.

This deeper meaning and purpose will be more fully revealed as we examine the other cards in subsequent posts.
Posted by Peter Saunders at 14:04