Ten myths about the redefinition of marriage 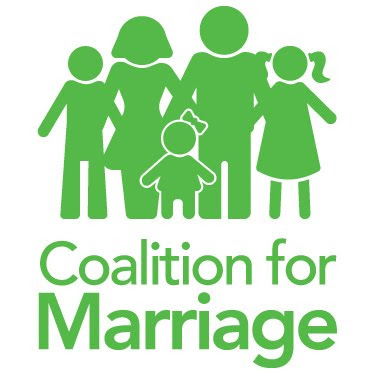 Thus far over 600,000 people have signed a petition launched by the Coalition for Marriage(C4M) against these plans which reads simply as follows:

‘I support the legal definition of marriage which is the voluntary union for life of one man and one woman to the exclusion of all others. I oppose any attempt to redefine it.’

I have previously written on this issue and have published 24 articles on all aspects of the debate. One of these, ‘Ten reasons not to legalise same-sex marriage in Britain’, gives an overview of the main issues.

This week, however, the Coalition for Marriage has published a new leaflet titled ‘Ten reasons why the government is wrong to redefine marriage’ which is available in pdf format on the C4M website.

It outlines ten myths about the redefinition of marriage.

I have reproduced the text below.

Ten reasons why the government is wrong to redefine marriage

Myth 1 - It will promote marriage

Evidence shows that redefining marriage actually undermines support for marriage in wider society. Neither has it delivered the promised stability for same-sex couples. In Spain, after gay marriage was introduced, marriage rates across the whole population plummeted. In the Netherlands too there has been a significant fall in the marriage rate since marriage was redefined. Same-sex marriage does not promote marriage.

Marriage between a man and a woman is not a recent social invention. Everyone knows that marriage predates law, nation and church. It goes back to the dawn of time. Yes, matrimonial law may have been tweaked over the years, but the law has never fundamentally altered the essential nature of marriage: a lifelong commitment between one man and one woman. Samesex marriage would rewrite hundreds of years of British legal tradition and thousands of years of cultural heritage.

Myth 3 - It’s all about equality

Myth 4 - No impact on schools

The current law requires schools to teach children about the importance of marriage. If marriage is given a new definition, it will be endorsed in schools. According to expert legal advice, any teacher who fails to endorse same-sex marriage in the classroom could be dismissed. Parents will have no legal right to withdraw their children from lessons which endorse same-sex marriage across the curriculum. Already supporters of gay marriage are recommending books (see here and here) for use in schools which undermine traditional marriage, and call on schools to get children to act out gay weddings. The effect on schools will be polarising and divisive.

Myth 5 - It won’t be a slippery slope

If we redefine marriage once, what’s to stop marriage being redefined yet further? If marriage is solely about love and commitment between consenting adults, what’s to say we shouldn’t recognise threeway relationships? It’s already happened in nations that redefined marriage. In Brazil, a three-way relationship was given marriage-like rights by a judge because of civil partnership laws. A similar situation has existed in the Netherlands for several years. In Canada after marriage was redefined, a polygamist launched a legal action to have his relationship recognised in law. When politicians meddle with marriage it all starts to unravel.

This slur is meant to shut down debate and stop people thinking for themselves. Nick Clegg landed in hot water over a draft speech which called opponents of redefining marriage ‘bigots’. He later retracted the word, but there’s no doubt that many who support this radical agenda think anyone who disagrees is not worthy of respect. However, support for traditional marriage has come from many respected academics, lawyers, politicians of all parties, and religious leaders. They all know that redefining marriage would have a profound impact.

Polling shows that only a minority of gay people (39 per cent) believe gay marriage is a priority. And according to the Government only 3 per cent of gay people would enter a same-sex marriage. A number of gay celebrities and journalists are themselves opposed to gay marriage. Latest official data shows that only 0.7 per cent of households are headed by a same-sex couple. Not all of them want, or will enter, a same-sex marriage. So, why is such a monumental change being imposed throughout society?

Myth 8 - The public supports it

Seven in ten people want to keep marriage as it is. Other polling which purports to show public support for gay marriage fails to tell respondents that equal rights are already available through civil partnerships. When people are told this crucial fact, most people say keep marriage as it is. MPs say their postbags have been dominated by public opposition to redefining marriage. Ordinary people want the Government to concentrate on reviving the economy and providing better public services, not meddling with marriage.

Since we already have civil partnerships, isn’t same-sex marriage just a small logical next step? No. Rewriting the meaning of marriage will have a far-reaching impact on society. Over 3,000 laws make reference to marriage. The Government has already admitted that official documents will need to be rewritten to remove words like ‘husband’ and ‘wife’. In France the Government is eradicating the words ‘father’ and ‘mother’ from all official documents. The Church of England has warned that it could lead to disestablishment and a constitutional crisis.

Myth 10 - Conscience will be respected

It’s not even being respected now. A housing manager from Manchester was demoted and lost 40 per cent of his salary for stating, outside work time, that gay weddings in churches were ‘an equality too far’. Conferences and symposiums in support of traditional marriage have been thrown out of venues. Adverts in support of a 600,000-strong public petition in favour of traditional marriage have been investigated as ‘offensive’. And all this has taken place before any change to the law has taken place. What will it be like if the law does change? A leading human rights lawyer has outlined the devastating impact of redefining marriage on civil liberties.
Posted by Peter Saunders at 13:34