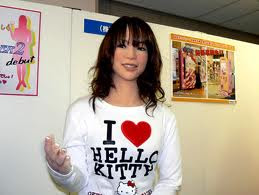 I have previously highlighted Japan’s huge demographic time bomb and the fact that virtually all Western countries now suffer from this same problem to a greater or lesser degree.

This growth of older people has been matched by a shrinking of the younger population.

A series of articles available on line outlines the causes to the problem and some approaches to dealing with it but has also been suggested that robot technology may provide an answer.

Japanese scientists have foreseen many applications for their robots. They could be used in hospitals, provide help for the elderly, be play-friends for children and replace humans in various activities.

Japan wants robotics to be for their 21st century economy what automobiles were for the 20th.

Humanoid Japanese robots characteristics include abilities such as blinking, smiling or expressing emotions akin to anger and surprise. One of the newest Japanese robots, HRP-4C is a female-robot programmed to catwalk.

It walks and talks and with the help of 30 motors it may move its legs and arms. The facial expressions that are capable of are driven by 8 facial motors to make it smile or blink and change the facial expression as a response to anger or surprise.

Take a look at some of the linked you tube videos below to see just where the technology is up to.

The Japanese image of a robot is that of a friendly helper rather than something to be feared or avoided. So it is certainly not inconceivable, as technology improves, that wealthy elderly Japanese without family support (or with absent or unhelpful children) might turn to robots to care for them in old age.

There is already a robot which can tell a forgetful elderly person to take their pills, or not to take them twice.

The Turing test is a test of a machine's ability to exhibit intelligent behavior, equivalent to or indistinguishable from, that of an actual human.

The indications are that Japan is not far off achieving this with some of its more sophisticated robots.

‘Let us make man in our own image’. Now where have I heard that before?

The world’s most humanoid robot

Most convincing robot woman ever

'Most realistic android ever'