The real meaning of the Tarot – 'The Lovers' 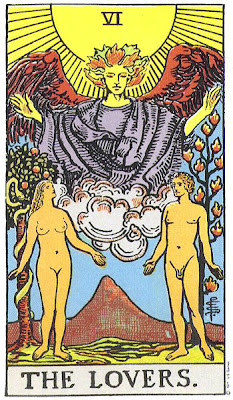 It is far better to seek to understand their symbolism and the ancient wisdom that lies behind it because it tells us how to make sense of the world and live in it.

I have already explained the rich symbolism behind the ‘Wheel of Fortune’ card and now move to ‘The Lovers’.

In this card we see two human figures, two trees and a third suspended figure with the sun shining behind its face.

We have already introduced in the first card the concept of the creator God – denoted by the Hebrew tetragrammatton YHWH – who stands outside the world distinct from it and is represented by a host of different symbols each of which tell us something about his character and purposes.

In the wheel of fortune card he is represented by the lion, bull, eagle and man. He is further depicted there as a lion bearing a two-edged sword – known as the Lion of Judah.

In this card we see him, in keeping with elements of this earlier symbolism, with the face of a man but bearing the wings of an eagle.

On this occasion he is seated not outside the world but is entering into it in order to enjoy a relationship with human beings.

The scene is one of perfect harmony. The human figures, male and female, are naked but not ashamed and enjoy close relationship with both each other and God.

There are two trees in the background, one bearing fruit with a serpent wrapped around its trunk, and the other bearing leaves.

As with the wheel of fortune card, in order to understand the symbolism we need to go to the symbolism in the Old and New Testaments that make up the Bible.

In Genesis 2 we learn that God placed human beings in a garden in which the two most important trees were the tree of life and the tree of the knowledge of good and evil.

Genesis 3 (read the whole account here) tells us that the serpent (identified in Revelation 12:9 with the Devil) deceived the woman and the man into doubting the word of God and rejecting him by eating the fruit.

But the symbolism in the card also carries signs of hope and a rescue not just for the alienated humans but also for creation itself.

The eagles’ wings point to the fact that God will initiate a rescue plan by calling out Israel into a special relationship with himself.

Exodus 19:4,5 and Deuteronomy 32:9-12 describe how God will rescue the nation of Israel (Jacob) by carrying them and protecting them with eagle’s wings. He would thereby keep his people safe out of the reach of the Devil (Revelation 12:14) and through a human descendant of Israel bring rescue to others.

The sun behind the human face is a reference to the fact that God himself will visit the planet again in the form of this human descendant with ‘a face like the sun’ (Matthew 17:2 and Revelation 1:16).

The outstretched arms point to the way in which this man will die and the clouds on which he is seated are a sign that he will later come in judgement (Daniel 7:13; Matthew 24:30).

Finally the leaves of the tree of life, depicted on the right of the picture, symbolise the healing of the nations that will arise as a result of this cosmic rescue (Revelation 22:2).