The Apostles' Creed – another take on Beethoven’s 9th symphony 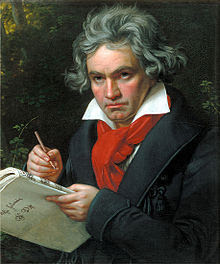 ‘Ode to Joy’ was written in 1785 by the German poet, playwright and historian Friedrich Schiller.

The ode is best known for its musical setting by Ludwig van Beethoven in the final movement of his Ninth Symphony (completed in 1824), a choral symphony for orchestra, four solo voices and choir.

Over recent years there has been an explosion of musical interpretations of Ode to Joy of which many are available on the internet.

Some of the most popular are those by the Melbourne Gospel Choir, ACM Gospel Choir, London Community Gospel Choir and of course Lauryn Hill’s memorable rendition in the Whoopi Goldberg film Sister Act 2.

It has been done by flash mobs and even the Muppets have got in on the act. Then of course there are numerous more traditional classical versions.

But I have searched long and hard, without success, for a version of the Apostles’ creed set to Beethoven’s ninth which we learned in New Zealand back in the late 1970s.

The Apostles' creed is one of the most succinct and beautiful statements of Christian belief ever written and has been set to a variety of tunes.

So here, from memory (and quite possibly not word perfect!), are the words which have been adapted from the original creeed. You know the tune already.

Maybe you could try it in your Sunday worship or like I have just make an addition to your own personal devotional repertoire.

If you prefer something a little truer to the original words then here is a more classical alternative version I nabbed off a church songsheet.

I’d love to see some Christian musicians having as much fun with the Apostles' creed set to Beethoven’s 9th as they have with ‘Ode to Joy’.

If anyone posts one on you tube then let me know.

I believe in God the Father, Maker of the heav’ns and earth
And in Jesus Christ, our Savior, God’s own Son, of human birth.
Virgin born, the Lord incarnate, Whom the Spirit did conceive;
Suﬀered under Pon us Pilate; He’s the God whom I believe.

Cruciﬁed, was dead and buried, Down to hell in victory;
From the dead he rose the third day; Up to heav’n triumphantly.
There at God’s right hand he’s ruling, By his will the world is led.
He will come to judge the na ons. Both the living and the dead.

I believe in God the Spirit, In his church, his chosen band.
They are joined in sweet communion, Holy in his sight they stand.
I believe in sins forgiven; That the dead will rise again;
I believe in life eternal. Amen! Amen! Amen!