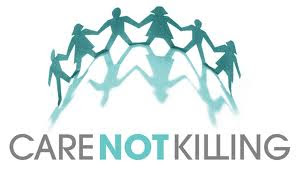 The press release reads as follows:

A programme featuring celebrity author Terry Pratchett was shown on BBC2 on Monday night following a huge amount of advance media publicity. It breaches international guidelines on suicide portrayal and, as such, poses a significant risk to vulnerable people. There is a real risk that copycat suicides will follow the screening.

· Avoid language which sensationalizes or normalizes suicide, or presents it as a solution to problems
· Avoid prominent placement and undue repetition of stories about suicide
· Avoid explicit description of the method used in a completed or attempted suicide
· Avoid providing detailed information about the site of a completed or attempted suicide
· Exercise caution in using photographs or video footage
· Take particular care in reporting celebrity suicides'

The programme which the BBC intends to screen on Monday constitutes a major risk to vulnerable people and may also be in breach of the Suicide Act 1961 which was amended in 2010 by the Coroners and Justice Act, making it illegal to 'encourage or assist' the suicide of another person. This new wording was adopted specifically to counter the encouragement of suicide by media or internet amidst concerns following the Bridgend cluster of suicides in 2007.

It is noteworthy that the national suicide prevention strategy for England, launched in 2002, is failing dismally to reach its targets and, perhaps tellingly, no annual reports are available since 2008.