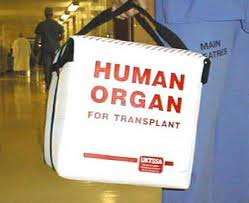 Recently I blogged about Jack Kevorkian, the American pathologist known by many as ‘Dr Death’ for his role in helping people commit suicide. He died on Friday 3 June in Detroit, USA.

Kevorkian killed 130 people through assisted suicide and was eventually jailed for giving a patient a lethal injection on television.

Despite claims that his murders were motivated by compassion, he once described the alleviation of his victims’ suffering as ‘a first step, an early distasteful professional obligation’ to get a license for human experimentation.

He was open about his desire to obtain organs for transplantation and experimentation. He even took the kidneys of one victim to a 1998 press conference where he offered them ‘first come, first served’.

You might have thought using the organs of victims of euthanasia was something in the realms of science fiction. It seems not.

I have just been alerted by Michael Cook of BioEdge to an article just published in the journal Applied Cardiopulmonary Pathophysiology, which demonstrates that using organs from euthanised patients seems to have become a well established procedure in Belgium, only nine years after it was legalized in 2002.

Michael reviews the article as follows:

A press release from a team at a hospital in Leuven announced yesterday that it had successfully transplanted lungs from four euthanised patients between 2007 and 2009.

The authors observe that the quality of the lungs from euthanised patients seems superior to those obtained from brain dead donors and donations after cardiac death. ‘In contrast to these donors, euthanasia donors do not experience an agonal phase before circulatory arrest as seen in donors dying from hypoxemia or from cardiogenic or hypovolemic shock.’

Apparently a number of patients who request euthanasia want to donate their organs. However, since many of them have cancer, the organs are not suitable. Three of the euthanased patients who did donate suffered from ‘a debilitating benign disease such as a neurological or muscular disorder’. The other was not ill at all, but had an ‘unbearable mental disorder’.

The authors were at pains to stress that they acted strictly within the guidelines for euthanasia in Belgium. All of the patients gave their consent.

On looking at the paper myself (linked above) it seems that 2.8% of all cardiac death donors were euthanized including 23.5% of all lung donors.

I was amazed at how nonchalantly the issue was dealt with as if killing patients and then harvesting their organs was the most natural thing in the world.

Given that half of all euthanasia cases in Belgium are involuntary it must be only a matter of time before the organs are taken from patients who are euthanized without their consent.

The matter of fact way the retrieval process is described in the paper is particularly chilling and shows the degree of collaboration that is necessary between the euthanasia team and the transplant surgeons:

‘Donors were admitted to the hospital a few hours before the planned euthanasia procedure. A central venous line was placed in a room adjacent to the operating room. Donors were heparinized immediately before a cocktail of drugs was given by the treating physician who agreed to perform the euthanasia. The patient was announced dead on cardiorespiratory criteria by 3 independent physicians as required by Belgian legislation for every organ donor. The deceased was then rapidly transferred, installed on the operating table, and intubated.’

In other words prep them for theatre next to the operating room, then kill them and wheel them in for organ retrieval. All in a day’s work in Brave New Belgium.

Wesley Smith's comments on this are very thought-provoking:

'Imagine being a devalued person with a serious disability and come to believe your life isn’t worth anything, and in fact, worry that you are a burden, to realize that you could reverse the situation by being euthanized and harvested? This is a emotional inducement to be killed, and as such, is extremely dangerous to the well-being of people with serious disabilities.

And it won’t stop there. Just as I was right in my 1993 prediction, trust me on this: Coming next–paying people with serious disabilities to be killed and harvested, like Jack Kevorkian once advocated. Utilitarian booster of such a course would argue that it saves society money on the costs of long term care, allow the disabled person the satisfaction of offering a benefit to society out of their personal tragedy, and leave a nice bundle for family, friends, or cause. Win. Win. Win.

Once you accept the premise that there is such a thing as a life not worth living–to the point that killing is an acceptable answer to the problem–there aren’t many arguments left against such a regime. People with disabilities should be very alarmed.'

I am told that if you take a frog and put it hot water it will jump out. If you put it in cold water and gradually bring it to the boil it will make no attempt to escape before being boiled alive – it simply will not recognize the gradual change in temperature. Human beings are not unlike frogs in this regard - if the moral climate changes gradually they don't notice it.

Belgium has been subject to a gradual rise in euthanasia temperature which means that doctors there now do things that those in most doctors in other countries would find absolutely horrific. Take warning! The price of freedom is eternal vigilance.
Posted by Peter Saunders at 11:53