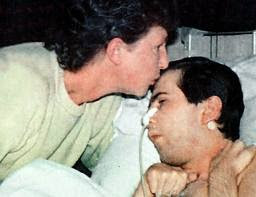 They included Ian Wilson, an Aberdeen man in his 50s, who suffered a severe head injury in a road accident 21 years ago and is now the longest surviving patient in the UK with vegetative state. He is looked after at home by his 83 year old mother. A second patient with the same diagnosis had died after a court ruled that food and fluids could be withheld.

But this is possible only for those in PVS. Those with lesser degrees of brain damage cannot have their lives ended in this way.

1.Should we be doing more to encourage families of those with PVS to go to the courts?

2.Should this form of ending life be extended to include those with minimal awareness states that are less serious than PVS?

Two doctors were interviewed, both professors in neurological rehabilitation, Derick Wade of the Nuffield Institute in Oxford, and Lynne Turner-Stokes of Kings College, London.

Turner-Stokes is the chair of a committee set up by the Royal College of Physicians to make recommendations about life-ending protocols for PVS patients. She pointed out the cost of looking after people so affected – about £100,000 per year – and asked whether this cost was justified given financial pressures on the NHS.

Wade was much more cautious and warned of the incremental extension that would follow any further change in the law.

The current law is soon to be tested by a case brought by the mother of a patient – known as M – who was left in a ‘minimally conscious state’ following an episode of encephalitis in 2003. The case has been reported by the BBC and Daily Mail and is to be heard in July this year.

Vikram Sachdeva, counsel for the mother, argues that M ‘is in a very low level minimally conscious state with no meaningful interaction with the environment.’

However, the application is ‘strongly opposed’ by the Official Solicitor, who represents M's interests.

This is a landmark case which, if successful, will radically redraw the law in this country and place the lives of many more disabled people at risk.

The Bland decision crossed a legal rubicon. Withdrawing nutrition and hydration from non-dying patients with the explicit intention of ending their lives is euthanasia by omission. This case, however, could take us several steps further down the slippery slope.

I will be watching it very closely.
Posted by Peter Saunders at 15:35